The three string quartets on this album, Mozart's swan songs in the genre, have been recorded many times, but this version ranks near the very top of the collection. Start with the recorded sound, for which Sony chose the unheralded LeFrak Hall at Queens College in New York. It's a superb example of chamber music engineering, with the instruments miked in such a way that the listener hears them coming from slightly different directions, just one would in a live concert at which one was seated 10 or 15 feet away. That in turn highlights the remarkable balance and ensemble of the Emerson Quartet, which is displayed beautifully in these quartets. The "Prussian" designation comes from the original commissioner, King Friedrich Wilhelm II of Berlin, who employed a top cellist at court and wanted quartets that would show off his abilities. Mozart complied with a group of works (only three of the requested six were completed) that use an active cello part to achieve the dense contrapuntal textures characteristic of the music of the last few years of Mozart's life. The Emerson Quartet gives a very fine, sensitive account in which the effects of this feature on the overall texture are quite subtly conveyed. The tempos are quick, and the group generally favors emotional intensity over formal balance (hear for example the grinding cello half-steps in the Trio of the Minuet of the String Quartet in F major, K. 590, and the rather magical resolution of this passage to a conventional Classical cadence). But the musicians maintain perfect control. It's a very exciting performance throughout, with an engineering team fully on board with the musicians' aims, and Mozart doesn't get any better than this. 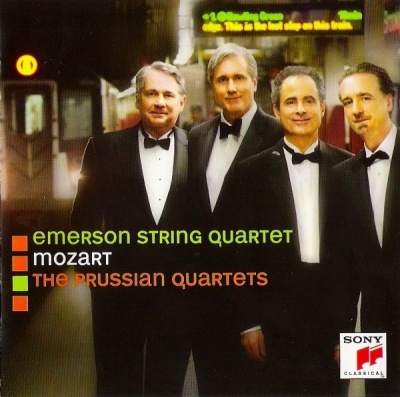