The actual title of this release is "The Album of the Soundtrack of the Trailer of the Film of Monty Python and the Holy Grail (1975)." As such, a majority of the disc consists of extracts from the motion picture's dialogue. This is a different approach from what writer/actors Michael Palin, Graham Chapman, John Cleese, Eric Idle, Terry Jones, and Terry Gilliam (also visual designer) had taken with their previous studio outings, which were in essence re-recordings of classic sketches from the Monty Python's Flying Circus television program. For the sake of continuity, several new bits have been added; chief among these are Chapman's assorted "Executive Edition" announcements, concluding with the "verrrry nice" "Executive Edition Addendum." For the "Tour of the Classic Silbury Hill Theatre" and "Live Broadcast from London: Premiere of the Film," Palin and Cleese provide setting and exposition for both the album and the film. At times they mock the visual aspects and the very nature of the cinematic experience as it translates (or fails to translate) onto vinyl. Much of what is included here has become legendary among the faithful, as well as definitive within the Python repertoire, most notably "Bring Out Your Dead," "A Witch," "The Knights Who Say 'Ni!'," and "Camelot," the Hollywood-style production number written by former Bonzo Dog Doo Dah Band member Neil Innes, who also provided all the songs for the flick. 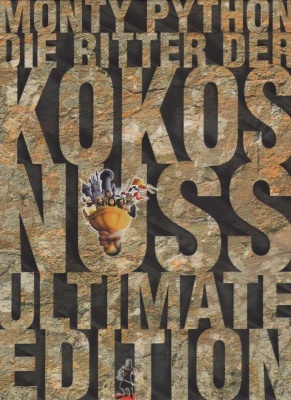