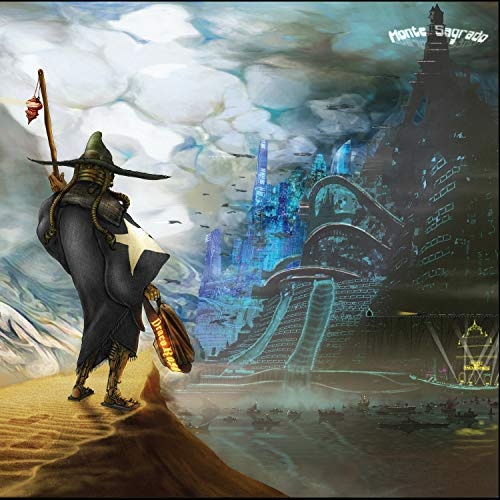 Monte Sagrado is Draco Rosa's first album of new studio material in nine years; it's hardly the comeback album fans might expect from him -- he didn't expect it, either. After recovering from two horrific battles with cancer, the artist returned to his Phantom Vox studio on his 100-acre farm in the mountains of Utuado, Puerto Rico, set to record new songs he'd penned for his comeback; it was to be an album of "beautiful songs" that both he and Sony agreed on. What happened when he entered the studio, however, changed that. For a few months prior to these sessions, doctors had been lowering Rosa's medication; his body and mind entered a renewed state of well-being. This rowdy, woolly collection of rock & roll songs is the end result -- though we may still get the previously considered album later.

The set roars to life with first single "333" and its jagged, distorted, detuned guitars and basses amid thudding hard rock drums. The vocals are shouted more than sung inside the din of noise. It doesn't sound "happy" but riotous. But that's deceptive. "333" is the sound of freedom, of being unchained; it's the sound of power. Rosa plays electric guitars, drums, keyboards, and handles programming and production with a small core band that includes Doug Pettibone on guitar. It's followed by the crunchy post-punk strut of "Que Se Joda el Dolor" with its squalling feedback, high-pitched backing chorus and Rosa's shouted indignance at his difficult recovery process (the title translates as "Fuck the Pain"). There's real drama in "Dentro de Ti." Its declarative vocal and pulsing, swaggering bassline recalls the Clash's "London Calling" and its squalling guitar break is not unlike Robert Quine at his most aggressive. But there is real joy in these songs, too -- check the warped, Latin souled-out rock in "Yo Mismo" as hovering B-3s and synths crisscross fuzzed-out guitars and layered harmony vocals. "2Nite 2Nite" is what serves as an unhinged apocalyptic party anthem here, with call-and-response vocals and an in-your-face hard rock mix: "No lover, it's not a crisis, it's liberation…." "Tuda La Oscuro" intersects at the corners of snotty punk rock and bluesy hard rock, while "The Thing I Done" is loose, heavy, razor-wired passionate reggae. The closer, "En Las Horas Mas Tristes," is a high-wire act that inseparably weaves together drama and gratitude in an eight-minute post-pysch sojourn. Monte Sagrado is radical, in its way a kindred spirit to 1994's Vagabundo (initially panned as too dark and experimental, it has since become a Latin rock classic). Draco Rosa is at the peak of his creative powers here, throwing off the shackles of sickness, doubt, and horror to embrace his recovering body and mind as sacred. The aggression is warranted, the raw energy a blessing, the darkness a gateway to hard-won joy. Monte Sagrado, like Rosa's journey, is nothing less than transformative. Welcome back.