The soundtrack to Mike Newell's Mona Lisa Smile, a Dead Poets' Society-like film set at a women's college in the '50s, features a wide array of contemporary artists covering standards from that decade. The soundtrack takes the utmost care to sound like an artifact from the early '50s, which is refreshing and frustrating in equal measure. Seal's "Mona Lisa" and Macy Gray's "Santa Baby" come so close to sounding like the versions popularized by Nat King Cole and Eartha Kitt, respectively, that it almost seems pointless to have recorded the new renditions in the first place. Yet these songs are better than Tori Amos' overly theatrical readings of "You Belong to Me" and "Murder He Says," which go beyond amusingly quirky to annoyingly quirky. Likewise, the Trevor Horn Orchestra's "Istanbul (Not Constantinople)" and "Sh Boom," as well as Elton John's "The Heart of Every Girl" (the album's only original song) are a little too cutesy for their own good. Mona Lisa Smile's best moments come from performers who don't try to emulate icons from the past or treat the songs like jokes: Chris Isaak's "Besame Mucho" is just as swoony as the versions that made it a standard during the '50s, but doesn't imitate any particular rendition; similarly, Kelly Rowland's "I'm Beginning to See the Light" is playfully flirty enough to sound like it could've been a hit in that era without trying too hard to emulate the styles of the time. Celine Dion's "Bewitched" may be the album's single best track, a lovely fusion of her own style and the vocal pop stylings of the film's era. Dion's sister diva Barbra Streisand doesn't fare quite as well with her version of "Smile"; her voice sounds as good as ever, but the song's languid pacing and the gooey strings make it sound syrupy instead of affecting. Even though the soundtrack is occasionally contrived, Mona Lisa Smile still has enough charming moments to appeal to fans of the film as well as fans of the artists on the soundtrack. 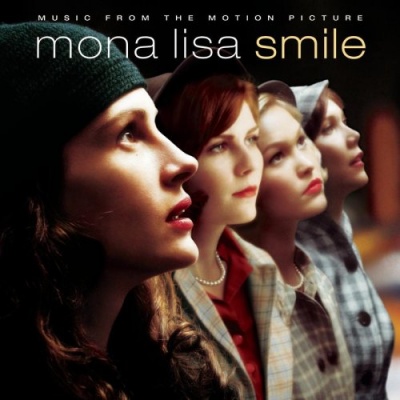