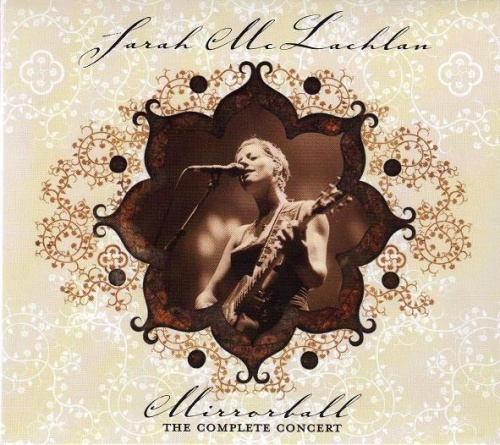 Sarah McLachlan's 1999 Mirrorball, her first ever live album, showed off the singer in the prime of career, when her popularity both as an artist and as the organizer of Lilith Fair had made her a star. And while that record was good, and exposed the talents of McLachlan's powerful, clear voice and the strength of her band, it generally stuck to her most famous songs, especially those off her then most recent album, Surfacing. That same year, however, a DVD of the last shows on her concert tour (in Portland, OR, on April 20 and 21, 1998), Mirrorball, also came out, and it featured the singer's entire set list -- which pulled from all four of the albums she had out -- as well as her conversations with the audience and her between-sing banter. Mirrorball: The Complete Concert, released in 2006, includes the audio tracks from that show, banter (even more banter, in fact) included. McLachlan sounds impeccable throughout the entire album, her voice sliding easily from its higher range in "Path of Thorns" to something softer in "Do What You Have to Do" to the near wailing in the extended version of the song that first brought her to fame in the U.S., "Possession." Her band, too, whom she introduces on the second disc, is tight and professional, adding enough of their own instrumental prowess to make the performance something different than what would be heard on the studio-recorded discs. In fact, the live versions of "Plenty" and "Ice," with their additional vocal harmonies, are superior to the originals, which if nothing else attests to the abilities of McLachlan and everyone with whom she surrounded herself. The majority of the material covered comes from Surfacing and Fumbling Towards Ecstacy, especially the latter -- all tracks but "Circle" are included -- but she also dips back into Solace for "The Path of Thorns," a rousing version of "Into the Fire," and "I Will Not Forget You" (which is not to be confused with "I Will Remember You," also performed here) and even to her debut, Touch, with "Vox." It's a strong set, presenting the best of what chick-rock was in the late '90s: emotional, introspective music that could kick in both a distorted electric guitar and a soft piano with equal facility. By 2006, McLachlan had sunk into adult contemporary obscurity/notoriety, but Mirrorball: The Complete Concert shows her at her best, a nice reminder of what she once was, and why she had so many devoted fans.