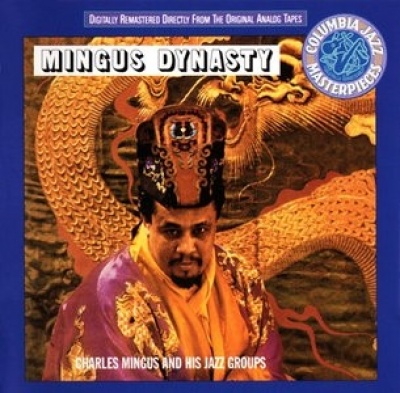 Mingus Ah Um catapulted Charles Mingus from a much-discussed semi-underground figure to a near-universally accepted and acclaimed leader in modern jazz. Perhaps that's why his Columbia follow-up, Mingus Dynasty, is often overlooked in his canon -- it's lost in the shadow of its legendary predecessor, both because of that album's achievement and the fact that it's just a notch below the uppermost echelon of Mingus' work. Having said that, Mingus Dynasty is still an excellent album; in fact, it's a testament to just how high a level Mingus was working on that an album of this caliber could have gotten lost in the shuffle. There's a definite soundtrack quality to a great deal of the music here, and indeed the majority of Mingus' originals here were composed for film and television scores and an expanded, nine- to ten-piece group. On some pieces, Mingus refines and reworks territory he'd previously hit upon. "Slop," for example, is another gospel-inflected 6/8 stormer, composed for a TV production that requested a piece similar to "Better Get It in Your Soul." The ferocious "Gunslinging Bird" follows a similar pattern, and it's the same piece whose full title, "If Charlie Parker Were a Gunslinger, There'd Be a Whole Lot of Dead Copycats," is given elsewhere. There are a couple of numbers from the Ellington songbook that both feature cellos -- "Things Ain't What They Used to Be" and a fantastic, eight-minute "Mood Indigo" -- and a couple of pieces that rely on the even more tightly orchestrated approach of Mingus' pre-Pithecanthropus Erectus days -- "Far Wells, Mill Valley" and the atonal but surprisingly tender and melodic "Diane."