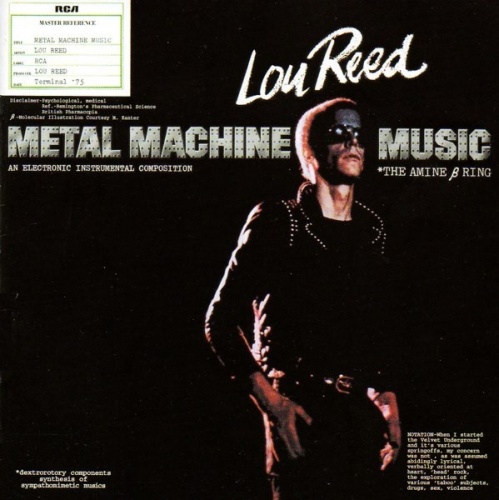 One would be hard-pressed to name a major artist who ever released an album as thoroughly alienating as Lou Reed's Metal Machine Music; at a time when noise rock and punk had yet to make their presence known, Reed released this 64-minute aural assault that offered up a densely layered soundscape constructed from feedback, distortion, and atonal guitar runs sped up or slowed down until they were all but unrecognizable. Metal Machine Music seems a bit less startling today, now that bands like Sonic Youth and the Boredoms have created some sort of context for it, but it hasn't gotten any more user friendly with time -- while Thurston Moore may go nuts on his guitar like this for three or four minutes at a stretch, Metal Machine Music goes on and on and on for over an hour, pausing only for side breaks with no rhythms, melodies, or formal structures to buffer the onslaught. If you're brave enough to listen to the whole thing, it's hard not to marvel at the scope of Reed's obsession; it's obvious he spent a lot of time on these layered sheets of noise, and enthusiasts of the violent guitar freakout may find it pleasing in short bursts. But confronting Metal Machine Music from front to back in one sitting is an experience that's both brutal and numbing. It's hard to say what Lou Reed had in mind when he made Metal Machine Music, and Reed has done little to clarify the issue over the years, though he summed it up quite pointedly in an interview in which he said, "Well, anyone who gets to side four is dumber than I am." For the record, I did get to side four. But I got paid for it.