Le Cid, based on the play by Corneille, was the opera with which Massenet followed Manon, his greatest success. Le Cid initially enjoyed a strong reception, but it has failed to hold a place in the repertoire, which is a shame since its music is colorful and expressive and it gives its leads ample opportunity to dazzle. This live recording, with the Opera Orchestra of New York and Byrne Camp Chorale, led by Eve Queler, is for the most part a compelling performance that makes a strong case for the opera. The opera is further proof, if any was needed, of Massenet's ability to evoke a particular place and era in his music; without using specific medieval or Spanish themes, he conjures a world that seems like a natural setting for the drama. The roles of Rodrigue and Chimene figure very prominently in the music and are lyrically spectacular showcases. Plácido Domingo and Grace Bumbry fill out the roles in shining form. Both are at the height of their powers and sing with ringing tone and the kind of breathtaking abandon that sends thrills down the spine. Of the rest of the cast, only Paul Plishka is a star; the others, while mostly unknown, are fully at ease and sing with conviction and expressiveness. Queler makes the most of the score's surging drama and pulsing lyricism, and except for one spectacular blooper, the orchestra plays well; at the end of the Infanta's gorgeous and dramatic prayer, beautifully sung by Eleanor Bergquist, part of the orchestra lands on a major chord and the other part on a minor chord. The sound quality is full and present, with very good balance for a live recording. Le Cid should be of strong interest to fans of Romantic French opera, and of powerful, old-fashioned bel canto performances. 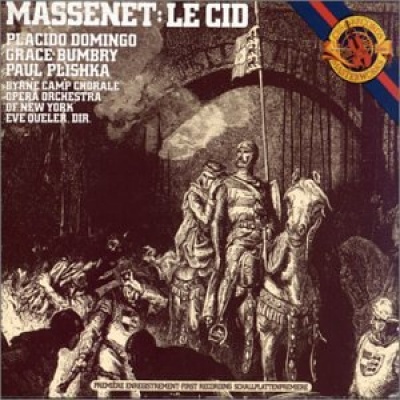