The virtuoso violinist is a roots rock U.S. fiddle champ and one-time king of Nashville's blue chip session players who has spent recent years exploring the riches of classical music. This amazing session is broken up into two main sections, a four movement thrust through the seasons and then a 13 track segment entitled "Strings and Threads Suite" which draws both poignantly and happily from the intense spirit of his Irish heritage. Both are performed with the Metamorphosen Chamber Orchestra, conducted by Scott Yoo. The seasonal sequence is an explicit nod to Vivaldi, wedding to the Shakespearean notion of the seven stages of man. There's also an interesting pull towards grounding the section in very American sounds like the acoustic steel string guitar. "Spring" opens optimistically with a growing rhythmic energy, while "Summer" goes from lazy and laid back to suddenly dance-driven with speedy fiddle stroking. "Fall" dawns with a sense of wistful melancholy, then "Winter" zips in with a rush of energy, a musical snowstorm that ebbs and flows in fits and starts; there's even a jig in the snow. The second suite keeps the jig vibe alive with "Fair Dancer Reel," then goes from jigs to waltzes to a darker shade of the blues. The impulse with both is to bring folk, jazz, and blues into the classical environment, not contrasting them but mixing them in a completely unique and logical way. The project closes with a seven minute orchestral mood piece called "Appalachia Waltz," which comes across as a meditation after a hectic day spent exploring seasons of both nature and the heart. Close to a modern masterpiece. 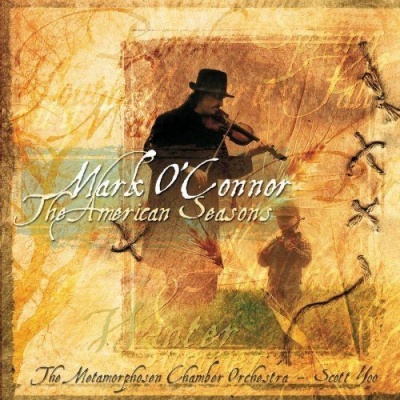