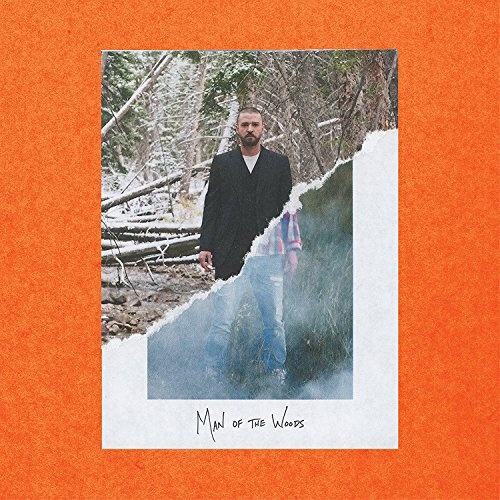 Man of the Woods is almost as bemusing as its roll out. After three disparate preview singles arrived in close succession in January 2018, Justin Timberlake trekked, or more likely took a plane, to Minnesota. While there, he hosted a Man of the Woods listening party at Paisley Park, home of Prince, who on Timbaland's "Give It to Me" he ridiculed in retaliation for a harmless and reasoned slighting of "SexyBack." A few nights after bringing it on down to Paisleyville, Timberlake performed nearby at Super Bowl LII, 14 years after he exposed Janet Jackson during the Super Bowl XXXVIII halftime program and juked unscathed as his co-performer's mainstream stock plummeted. Following the Trolls soundtrack hit "Can't Stop the Feeling!" -- which showed again that he's best at carefree post-disco pop -- Timberlake made his conceptually muddled, qualitatively uneven fifth full-length. Loosely inspired by his Southern upbringing but recorded primarily in Los Angeles, Man of the Woods resembles the soundtrack to a late-evening variety program that moves across departments of a high-end outdoor recreation outfitter. Timberlake brought some special guests and made it a family affair with appearances from his wife and son. The main collaborators are the Neptunes, who apply much more acoustic guitar and hand percussion than normal but don't veer far from familiar funk-laced pop -- the Italian Riviera trap of "Supplies" notwithstanding. One of the better moments, "Breeze Off the Pond," sounds like a sequel to Neptune Pharrell Williams' "Gust of Wind" with a flashback to "Rock Your Body." Chris Stapleton lends some country credibility to "Say Something," a song so vague lyrically that its conclusion, "Sometimes the greatest way to say something is to say nothing at all," sounds kind of profound. Elsewhere, there are enough thematic terms to fill a promotional word search. They tend to be hastily applied, sometimes expressed with extended vowels to remind listeners of Timberlake's origin. Ultimately, what comes across, through all the references to outdoor activities and apparel, is good times, comfort, romance, and seduction. There's also a little ribaldry, and even that is used in a somewhat mystifying manner. Timberlake titled the album after the meaning of his son's name, yet "Man of the Woods" itself is a crudely metaphorical come-on in which he excitedly observes "Your hands talkin', fingers walkin', down your legs, hey there's the faucet." It exemplifies the confusing, perhaps appropriately woolly nature of the album.