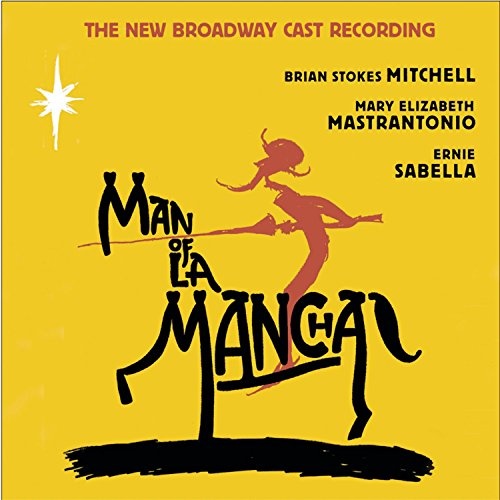 Man of la Mancha, a musical retelling of Cervantes' Don Quixote, was a work of its time that echoed the idealism of the 1960s during its first production, which veered back and forth between Broadway and off-Broadway houses from 1965 to 1971. It was also very much a star vehicle for Richard Kiley, who embodied the part of Don Quixote and sang "The Impossible Dream (The Quest)" not only in the original production, but also in Broadway revivals in 1972 and 1977. Another revival was mounted in 1992 with Raul Julia, the reigning male star of Broadway at the time, but it lasted only 108 performances. A decade later, Broadway had a new king, Brian Stokes Mitchell, whose resumé included Ragtime and a celebrated revival of Kiss Me, Kate, and Mitchell was the prime mover behind another Man of la Mancha revival that opened to good reviews and box-office enthusiasm on December 5, 2002. The cast album reveals him to be a less authoritative Don Quixote than Kiley was but still very effective, leading a good supporting cast including Mary Elizabeth Mastrantonio and Ernie Sabella. Mitch Leigh's flamenco-influenced music remains appealing (and retains its air of American folk music), though the songs are still very similar to each other. Man of la Mancha is a show that is all heart, as the performers and the audience join together to suspend reality, both in the traditional theatrical manner and also within the story, while Don Quixote pursues his sweet insanity. That inherent theatricality and emotional appeal make Man of la Mancha virtually foolproof, as long as the show is played sincerely, and it is here. This cast album is no replacement for the original Broadway cast album, but it is impressive on its own terms.