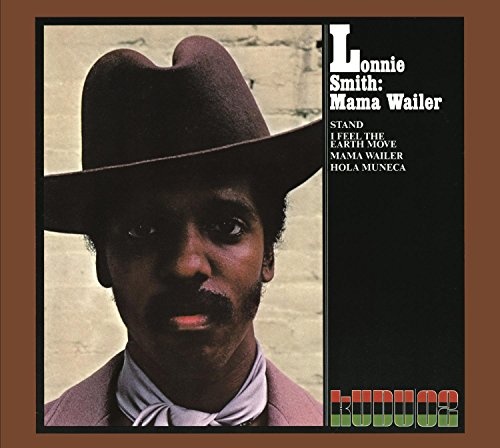 Dr. Lonnie Smith's Mama Wailer is one of the quintessential sides issued by Creed Taylor's CTI/Kudu imprint. Out of print for decades on LP, in 2003 it became available again in Japan as a beautifully remastered CD -- as part of King's ambitious reissue project of all things Kudu. Uncharacteristically, Smith played clavinet as well as organ on this set, and arranged all but one track. The rest of the band was comprised of Billy Cobham, Ron Carter, Chuck Rainey, Grover Washington, Jr., Airto, Jimmy Ponder, George Davis, and others. There are only four cuts on Mama Wailer, the title and "Hola Muneca" were written by Smith, the others are covers of pop tunes from the era: Carole King's "I Feel the Earth Move," and Sly Stone's "Stand" -- the latter takes up all of Side Two. Smith's keyboard playing -- particularly on the clavinet, is dirty, greasy, and way-gone funky. He rides Latin grooves on "Hola Muneca," and his B3 collides with the basses and Cobham's dancing, inverted backbeat groove. This is what Latin soul is all about when it meets jazz. The improvisations are in the pocket, but, at the same time, off the page. Here is where boogaloo and hard bop meet headlong. On the King tune, soul-jazz reigns supreme as the B3 administers groove therapy to the rhythm challenge. Elsewhere, as on "Stand," (arranged by Washington), Smith's overdubbed B3s create a wondrously complex harmonic melody as the band moves in behind the beat. A few minutes in (it's almost 20 minutes in length), the ensemble picks up the tempo, and falls into the groove pocket from which all things are possible improvisationally. Two-and-a-half minutes into the tune, the jam unfolds, a soul-jazz deep funky grit that streams and sweats call-and-response lines from one player to the next. For anyone who's ever had reservations about Washington's ability to cut loose as an improviser, they need only to give this track a listen and then apologize to his ghost. As guitars weave in and around the slinky, deep-groove basslines, Smith and Washington trade fours, and then Ponder turns his guitar into an overdrive machine to match Smith line for line, interweaving and intercutting before the whole mutha lifts off at eight-minutes-thirty-seconds and into a James Brown and His Famous Flames riot of soulful funky badness that nonetheless allows for Washington to solo outside on the edges of an over-amped rhythm section. Whew!