This complete set of Witold Lutoslawski's symphonies is a mixture of old and new. The second, third, and fourth symphonies are reissues of recordings made in the 1980s and 1990s during Esa-Pekka Salonen's tenure with the Los Angeles Philharmonic; all were acclaimed readings, and the 1985 version of the sizzlingly orchestrated Symphony No. 3, by now Lutoslawski's most commonly programmed and recorded work, has held up well against newer recordings. What's new is the Symphony No. 1, recorded in the new Walt Disney Hall to round out the set in commemoration of the composer's 100th birthday. (The entire recording of the symphony is new, although the bizarre numbering of the tracks makes this difficult to figure out.) This work is not often played. Lutoslawski wrote it in occupied Warsaw and managed to physically carry the score out of the city during the 1944 Warsaw Uprising and hide with it in an attic for eight months. Later he expressed a negative attitude toward the piece, but it's well worth hearing. It might be described as overgrown neo-classicism, with short sonata-form movements and strong traces of Prokofiev and Albert Roussel, but with harmonic density, Lutoslawski's complex orchestration, and his characteristic bristly counterpoint breaking out everywhere. Salonen still ranks as Lutoslawski's foremost champion, and these four symphonies, evenly distributed over 50 years of the composer's career, form an arresting portrait of the figure in whose work modernism and the traditional symphonic medium seem most closely reconciled. If there's a complaint here, it's that the remastering, although quite good, cannot compensate for the sonic differences between Walt Disney Hall and the earlier recordings in a studio and in the Dorothy Chandler Pavilion. The set makes you want to hear all four symphonies conducted by Salonen in the new hall, which seems tailor-made for Lutoslawski. 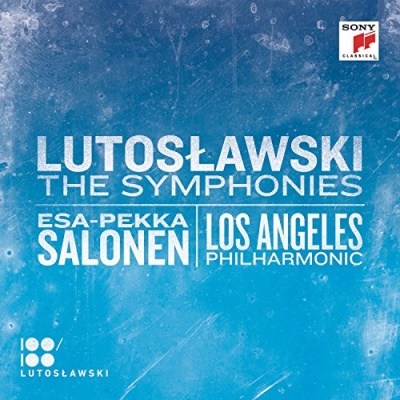