Towards the beginning of trumpeter Theo Croker's seventh album, 2022's Love Quantum, he makes the bold proclamation: "Long live music, jazz is dead." The edict arrives via the song "JAZZ IS DEAD," a woozy, psychedelic anthem featuring a guest appearance by saxophonist Gary Bartz, a veteran of Miles Davis' 1970s fusion band whose presence helps to underline Croker's broad-minded aesthetic. "JAZZ IS DEAD" works as a statement of purpose for Love Quantum, an evocation of the genre-defying spirit the trumpeter has increasingly embraced since at least 2016's Escape Velocity. The grandson of legendary jazz trumpeter Doc Cheatham, Croker (who also studied with Donald Byrd at Oberlin Conservatory) has built an impressive career, balancing a deep grasp of the post-bop jazz tradition with his own atmospheric blend of mystical groove-based jazz, funk, electronica, and hip-hop. It's a sound that reached apotheosis on 2021's Blk2Life/A Future Past, which was less of a jazz album and more of a kaleidoscopic vision of musical Afrofuturism. Love Quantum is the next evolution in that vision as Croker crafts shimmering, dewy soundscapes that straddle the line between spiritual funk, electronic R&B, and space jazz. While Croker's warm, often hushed trumpet sound has long brought to mind the playing of Miles Davis, his approach on Love Quantum also resembles Davis' approach as a bandleader -- knowing when to push himself into the spotlight and when to pull back into the shadows and let his band shine. This is something Croker does throughout Love Quantum, spotlighting longtime collaborators like drummer Kassa Overall, as well as bringing on board a bevy of guest artists to help illuminate his interstellar vibe, including James Tillman on the dreamy, Sade-esque "Royal Conversation" and singer Teedra Moses for the acid jazz-sounding "Love Thyself." We also get equally potent contributions by Jill Scott, Jamila Woods, and Ego Ella May, the latter of whom brings her sweet, Billie Holiday-meets-Erykah Badu style to Croker's hypnotic ballad "Somethin'." Also returning from Blk2Life is rapper Wyclef Jean, who taps his own '90s hip-hop jazz history on the kinetic and flowing album closer, "She Bad." With Love Quantum, Croker continues to push his sound well beyond the confines of jazz traditionalism and embrace the expansive purity of his musical self. 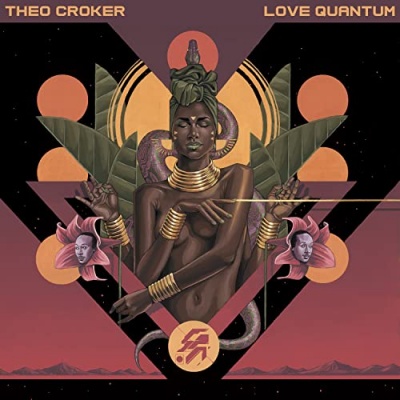