As the '60s became a time of deep socio-political change and upheaval in America, the country music establishment wasted little time establishing itself as the voice of the "silent majority" who wanted to live in a quietly conservative nation (as opposed to the loudly conservative point of view that would arise in Nashville in the '80s and onward). One exception to this was Johnny Cash, who was often moved to speak out in favor of justice for the disadvantaged and disenfranchised. One of Cash's first and most powerful statements in favor of human rights was his 1964 album Bitter Tears, a song cycle that dealt with the way Native Americans had been wronged throughout United States history, and remarkably, one of its most powerful songs actually became a hit single -- "The Ballad of Ira Hayes," drawn from the true story of the Pima Indian soldier who helped raise the flag at Iwo Jima during World War II, only to face brutal racism and succumb to alcoholism after returning home. To honor the 50th anniversary of Cash's album, producer Joe Henry has assembled Look Again to the Wind: Johnny Cash's Bitter Tears Revisited, a collection featuring a handful of noted folk and country artists covering the songs from Cash's landmark album. The tone of Look Again to the Wind is gentler and more thoughtful than Cash's original album, largely due to the artists involved -- while Cash's voice was legendarily strong and dark, the vocalists here include Gillian Welch, Emmylou Harris, Nancy Blake, and Bill Miller, whose performances are heartfelt but less physically imposing than what Cash delivered in 1964. In addition, producer Henry has aimed for a sound more intimate and atmospheric than that of the originals, dominated by acoustic instruments and the often stellar picking of David Rawlings. But if this album is more subtle, the best work here is moving and eloquent stuff, especially Gillian Welch on the opening cut "As Long as the Grass Will Grow," Kris Kristofferson putting all of his gritty authority into "The Ballad of Ira Hayes," Rhiannon Giddens from the Carolina Chocolate Drops sounding sweet but strong on "The Vanishing Race," and Steve Earle having a grand time dishonoring the dead on "Custer." Ultimately, Look Again to the Wind is more about the fine songs on Bitter Tears (most written by Peter LaFarge) than Johnny Cash, but these performances certainly honor the courage of Cash, who was willing to speak out for Native American rights at a time when it was an issue that barely registered in the public consciousness. The issues raised on Bitter Tears are still relevant, and Look Again to the Wind reminds us that art can still speak eloquently about the best and worst parts of the human condition, and it's well worth investigating. 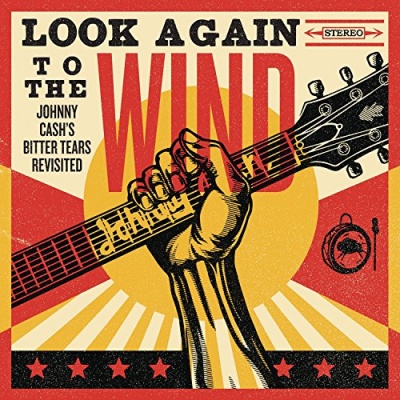