"I do Lou Reed better than anybody, so I thought I'd get in on it," Reed says at one point during this double live set, and that seems to sum up the album's theme quite well. Recorded during a week of shows at New York's Bottom Line in 1978, Live: Take No Prisoners presents Lou Reed the Standup Comic, doing schtick on Patti Smith ("F*ck Radio Ethiopia, man! I'm Radio Brooklyn!"), political activism ("Give me an issue, I'll give you a tissue, and you can wipe my ass with it"), and the agony of playing "Walk on the Wild Side" ("It's not that I don't want to play your favorites, but there are so many favorites to choose from!") while occasionally pausing to play a song. As a comic, Lou is no Lenny Bruce or Bill Hicks, but he's funny by fits and starts (and he plays guitar better than either of them). On the odd moments when Lou is focused enough to actually perform a song from start to finish (such as "Pale Blue Eyes" or "Coney Island Baby"), he's in fine form, sounding loose but enthusiastic, but those moments don't happen especially often, and this album plows through a mere ten songs in close to 100 minutes, which gives you an idea of just how far he stretches out here. If you're a fan who wants a look into the mind of Lou Reed, comic or otherwise, Live: Take No Prisoners certainly fills the bill, but if you want to hear Lou actually play his music, you're better off with Rock N Roll Animal or Live in Italy. But then again, as Lou himself points out, "What's wrong with cheap dirty jokes? I never said I was tasteful." 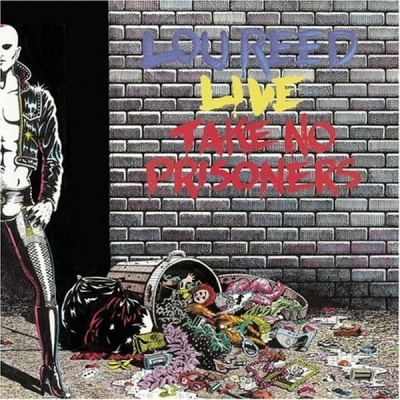