Difficult to find and seemingly assembled from spare parts, Live Songs is the shabby orphan in Leonard Cohen's catalog. It is also one of his most thrilling releases. Culled from a series of 1972 concerts (except for "Tonight Will Be Fine" from the Isle of Wight festival), the album consists of compositions from 1969's Songs From a Room and a handful of otherwise unavailable material. Those familiar with Songs From a Room will find that the live versions improve upon their studio counterparts, which sound like they were recorded down a well. The spirited hoedown rendition of "Tonight Will Be Fine" includes two extra verses, and the lovely, restrained performance of "Bird on the Wire" may be definitive. As for the oddities, Dick Blakeslee's spry political allegory, "Passing Through," suits Cohen's dry delivery, and the hypnotic instrumental "Improvisation" reveals a rarely seen side of his musical personality. Curiously enough, the haunting prologue and the poem-as-dirge "Queen Victoria" don't seem to have been recorded live at all. The centerpiece of the album, however, is "Please Don't Pass Me By," a monstrous 12-minute rant, both outrageous and deadly serious, apparently half written, half made up on the spot. Cohen dedicates the song to a host of outcasts, including "the cripples, the maimed, the freaks...the burned, the burning...the Jews and the gypsies" killed in the Holocaust, "the children of England," and "a savior with no one to save," then goes on to beg some unspecified addressee (the listener?) to get naked for him. Before the song is over, he declares that he can't stand himself and instructs the members of the audience to "go home with someone else." Only a daredevil artist could freak out so totally and articulately before a crowd of paying customers. Cohen fanatics will know they've hit the jackpot when they hear Live Songs. Anyone who cares about poetry and raw emotional honesty in popular music should at least find it interesting. 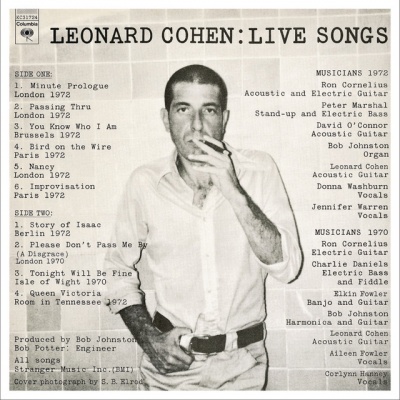