As more than one writer has pointed out, in 2008 and 2009 Leonard Cohen's loss became his audience's gain. After spending five years living as a monk in a Buddhist monastery during a sabbatical from music, Cohen discovered in 2005 that his former business manager had embezzled nearly all his savings, and two years later, in order to put his finances back in order, he warily agreed to an international concert tour, his first in nearly a decade and a half. Given the circumstances that prompted Cohen's return to the stage as well as his age -- 73 when the tour began -- one would have the right to wonder just how enthusiastic the great songwriter would be about meeting his audience again. But judging from Live in London -- a two-disc set recorded during a rapturously received appearance at London's O2 Arena on July 17, 2008 -- these concerts have unexpectedly given Cohen a chance to remind the world of his strengths as a musician and a performer, and he's embraced the opportunity with joy. The notion of Leonard Cohen playing a 20,000-seat arena may seem a bit surprising (at least in America), but Cohen and his nine-member supporting ensemble give 25 songs from his catalog a treatment that fills them out enough to work in a massive room (at least compared to the intimate arrangements of his early work) without crushing the nuances of gentler numbers like "Who by Fire" and "Suzanne," while "The Future" and "Democracy" sound just as big as they need to be. There's sometimes a bit too much David Sanborn in Dino Soldo's horn solos, but otherwise the band is superb -- especially Javier Mas on banduria, laud, archilaud, and guitar, and the vocal ensemble of Sharon Robinson, Charley Webb, and Hattie Webb -- and despite the craggy, weathered state of Cohen's voice, he sounds sure and committed from the first moment to the last, often finding notes that seem elusive at first, and his performance here is genuinely engrossing. It's also surprisingly witty; Cohen may have a reputation as one of the most dour performers in contemporary music, but his between-song patter is charmingly droll, and he finds a passion and a humanity in his songs that sets them apart from their studio counterparts. Cohen sounds genuinely moved by the affectionate reception he receives from his audience, and he seems determined to give them a show to match their loyalty, and with his band (who he frequently lauds during the performance) he truly gives of himself; if this isn't quite the strongest live performance Cohen has released for public consumption, it's certainly the warmest and the most emotionally resonant. Perhaps fate forced Leonard Cohen's hand to stage the tour documented in part on Live in London, but it seems that fate knows just what it's doing, and this album eloquently demonstrates how much Cohen still has to offer, and how clearly his music still speaks to him (and us). 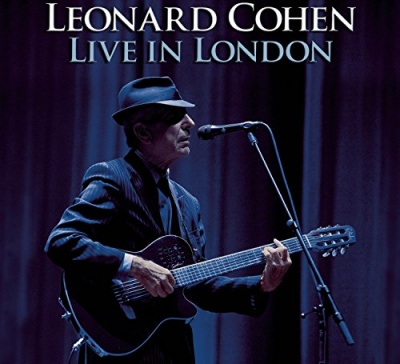