Live from Dublin: A Tribute to Derek Bell Review

Harp player/multi-instrumentalist Derek Bell, a member of the Chieftains since 1972, was -- unlike his co-conspirators -- a classically trained musician. His love for the traditional music of Ireland and the world over, as well as his mischievous nature, may have found him bestowing his talents upon an entirely different audience than he originally expected, but as he was fond of saying, "No one ever asked me to join, and no one ever asked me to leave." Recorded in 2004, Live From Dublin: A Tribute to Derek Bell finds the remaining members, as well as numerous special guests including Allison Moorer and Anuna -- the latter do flawless rendition of the tongue-twisting classic "Fionnghuala," made famous by the Bothy Band -- burning through a set of both traditional and contemporary sets that manage to celebrate the group's lauded past while keeping an eye on their immediate future. The performances are all top-notch and the emotions run high, resulting in a powerful -- yet whimsical -- celebration of one of Celtic music's late greats. 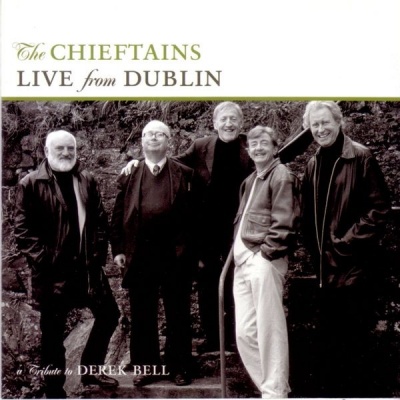 Live from Dublin: A Tribute to Derek Bell Album Information