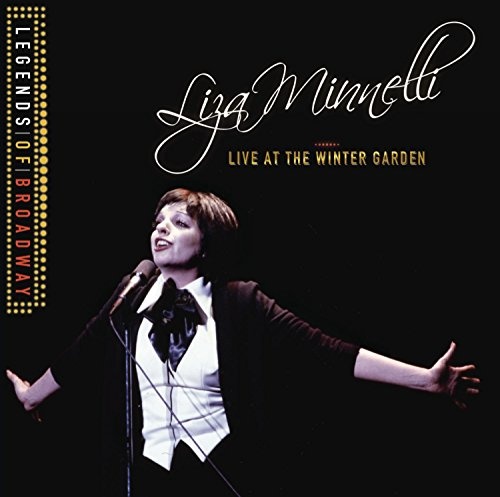 After taking on a batch of contemporary pop songs on her 1973 studio album The Singer, Liza Minnelli returns to a more familiar format here. Movies, Broadway musicals, and television appearances notwithstanding, she has devoted much of her career to her concert/nightclub act, and Liza Live at the Winter Garden shows what it sounds like, circa 1974. And that is, essentially, a revised and updated version of the show she immortalized as Liza with a "Z" in 1972. She tries to mix contemporary material with show tunes, beginning with a medley of Gordon Lightfoot's "If You Could Read My Mind" and "Come Back to Me" from the Lerner & Loewe musical On a Clear Day You Can See Forever. It doesn't really work, despite her usual full-throttle performance style, and she is far more comfortable with Tin Pan Alley fare and nuggets from decades past, such as "Shine on Harvest Moon" and "More Than You Know." She tries to go contemporary again at the top of the LP's second side with the funky "Natural Man" and Johnny Nash's "I Can See Clearly Now." But, again, she sounds far more in command immediately after when she dramatizes two chansons by her sometime concert partner Charles Aznavour, "And I in My Chair (Et Moi Dans Mon Coin)" and "There Is a Time (Le Temps)." Her mentor, lyricist Fred Ebb, is given credit for writing the show, and he and his composing companion, John Kander, have penned some special material, notably the novelty "Exactly Like Me," a funny song in the style of "Liza with a ‘Z'" that finds Minnelli encountering some unlikely fans who think she looks like them. An attempt seems to have been made to avoid repeating songs that have appeared on earlier Minnelli recordings, but it's hard not to end with her no-holds-barred performance of "Cabaret." This is a typically effective live show from Minnelli, and clearly just a souvenir from the act itself that could only be completed by seeing as well as hearing her.