Finally, a non-bootleg issue of one of Miles Davis' greatest electric performances ever. In fact this is the very first of the Miles Davis Quintet's electric gigs -- it was also one of the last four performances of this great band. Not just recorded, but performed. The band, consisting of Davis, Wayne Shorter on soprano and tenor, Chick Corea on Fender Rhodes, Dave Holland on both acoustic and electric bass, and Jack DeJohnette on drums. With percussionist Airto Moreira providing color and texture, the band became a sextet. This night is auspicious because audiences -- most of which were there to see the Steve Miller Band or Neil Young and Crazy Horse (Davis' group opened for both) -- were familiar with the electric side of Davis because In a Silent Way had been issued late in 1969 and had introduced the world to John McLaughlin. Bitches Brew, which had been recorded the summer before, would be released a month after these concerts, and an unsuspecting rock audience had no idea what to expect. If they were expecting In a Silent Way -- played by an octet that included three keyboardists -- that's not what they got here. This is the most muscular, hard, and funky of Davis' early electric outfits. His own playing is stunning, punching out the footlights on Joe Zawinul's "Directions" or his own rambling deep-in-the-modal blues tune "Spanish Key." Whatever Davis thought about John Coltrane, Ornette Coleman, and the avant-garde was allowed full play in this band as long as the intense, deep funk of the rhythm section was adhered to. Davis himself follows Shorter, smattering out notes in outrageous harmonic signatures on "Masqualero." This band has a drive, and their playing reveals that they have something here, something new to bring to the table that has never been heard before. And indeed, even now, since this particular band never recorded in the studio as a unit, this sounds new even. Yes, it sounds like jazz, but it's got energy, drive, and pumped up, intricate polyrhythms -- thanks to the otherworldly percussion stylings of Moreira. When Davis takes out the first set with "It's About That Time"/"The Theme," listeners are hearing these tunes as if for the very first time. The sextet's arrangements have been shoved to the margins and new elements of harmony and counterpoint are brought in to account for the driving tempos and amplification of the instruments. Davis screeches through his solo at a blinding tempo as Chick Corea paints it with huge, extended, and augmented sevenths and flatted ninths, touching off a solo himself so full of knotty arpeggios that it's difficult to know what to make of it except that it smokes. Shorter's solo is so passionate and full of fire you would never have guessed he would be gone from the band four nights later, jumping ship to create Weather Report with Zawinul. The second set gets off to a moodier, darker start with Zawinul's "Directions." Spare keyboards and drums DeJohnette plays like a dancer who has the power of a bulldozer on this night -- ease in the mode before Shorter slips in a note or two and then Davis himself cuts into the center of things with a blur of notes and a riff picked up on by Moreira. After this band enters into the melody line it becomes a Corea-Davis fest, trading fours, eights, and twelfths -- no matter how fast Corea can lay it down, Davis is already in response mode and harmonically alters his framework so Corea has to shift too. The sound of the band is so dirty, so raw, it comes off as guttersnipe jazz with the overdrive of the best rock & roll. Without a guitar, this band is clearly blowing the doors off the room and making it very hard for Miller or Young to come out and play afterward. The rest of the set is almost a medley, beginning with "Miles Runs the Voodoo Down," collapsing all previous notions of modalism contextual freedoms, then traveling deep into a "Bitches Brew" that could have been played by James Brown's Flames, so hard and skittish is it's funk with a starker, more dissonant reading of "Spanish Key" before taking it out with "It's About That Time?"/ "Willie Nelson." (Perhaps a tribute to Nelson's battles to get Charley Pride a gig at the Grand Ole Opry as its first black performer.). In any case, so much of this is wasted on the audience at the Fillmore, responding with a confused, bewildered applause, with a couple of rowdies calling for an encore. It doesn't matter. The historical significance of this record is paramount. It is unedited and released as the gig happened on that day -- which makes it virtually unique from every other electric Davis live performance. This is music is as exciting, revelatory, and dangerous today as it was on March 7, 1970. It's about that time. 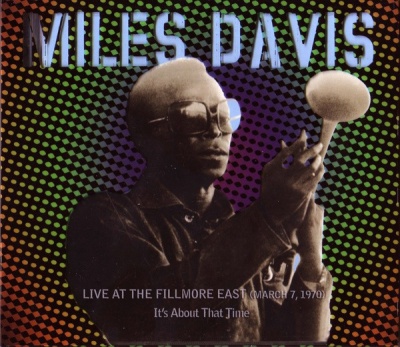 Live at the Fillmore East, March 7, 1970: It's About That Time Album Information