With only four shows left in its six-month tour and drawing closer to its Seattle home, Pearl Jam exhibited a bit more enthusiasm and inspiration in Portland than it had shown in some of the previous week's concerts in California. After going three straight concerts without playing a single song from the No Code album, the band introduces some songs from the album back into the set, starting with the opener, "Sometimes." Highlights of the show include a humorous added verse at the end of "Wishlist" about wishing to be the president. "State of Love and Trust" pops up in the middle of the main set. The infrequently played Binaural song "Thin Air" makes an appearance, and there are yet more improvised lyrics in the middle of "Porch" to close the main set. The encore features the last semi-spontaneous improv of the tour, with lyrics about coming home after a long trip and pleading to be welcomed back. The show finishes unusually with the Neil Young (or Young Neil, as Eddie Vedder likes to say) song, "Fucking Up." Overall, this concert shows that the band found a new reserve of energy for its final push toward home. The unique improv makes it a must for serious fans, and the overall vibe makes Portland one of the better concerts on this leg of the tour. 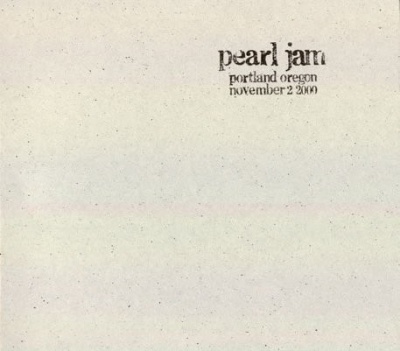