Pearl Jam's October 9, 2000, concert in Chicago is one of the classic shows in the 2000 tour official bootleg series. It was marked as one of the band's favorites for good reason. Eddie Vedder returned to the state where he was born, and the crowd is one of the most energetic of the entire year. Also contributing to the vibe was the fact that the previous night's show in Wisconsin was held outdoors in freezing conditions, forcing the band to cut the concert a little bit short. Tonight, the band is overjoyed to be back indoors and warm, and they just want to keep playing. Vedder warns the audience during the first pause that it might be a long one, and the crowd responds with overwhelming enthusiasm. Indeed, the band plays 23 songs before taking a break instead of the usual 17-20, and performs 30 songs overall, making this one of the longest shows of the year. The band plays in an inspired fashion, starting right from the beginning when "Release" -- from the band's classic debut album, Ten -- is played as the opener. It is the band's best opening song. The emotional intensity of this introspective ballad instantly raises the energy level in the arena whenever it is played. Another classic Ten song that is played at every show, "Even Flow," is a highlight tonight. The song is much more inspired than usual, with Mike McCready playing a fiery solo. However, even though the playing is inspired, the concert does not feature the band at their finest overall. Vedder has embarrassing lyrical amnesia during the concert staple "Corduroy" and the frequently played B-side "Leatherman." Also, with 13 songs combined from 1998's Yield and 2000's Binaural, the show is a bit too heavily weighted toward newer material. Older crowd-pleasers like "Daughter" and "Porch" would have been perfect on a night with so much energy. The show ends on a suitably high note for such a magical night, as the band finishes with one of their favorite covers, the Who's classic "Baba O'Riley." Vedder tells the crowd that if they sing it well enough, it might end up on an album (a Who tribute record). Although the band eventually chose not to use the song on the tribute album, the crowd sings the song with all their might, bringing the concert to a proper ecstatic finish. Overall, this night in the windy city was one to remember, and definitely a high-priority purchase in the 2000 bootleg series. 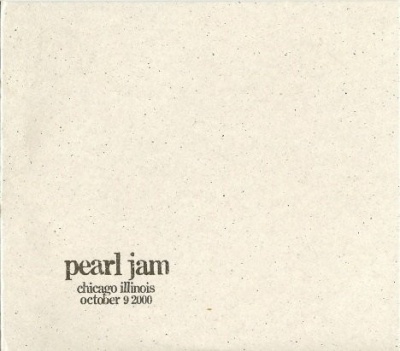