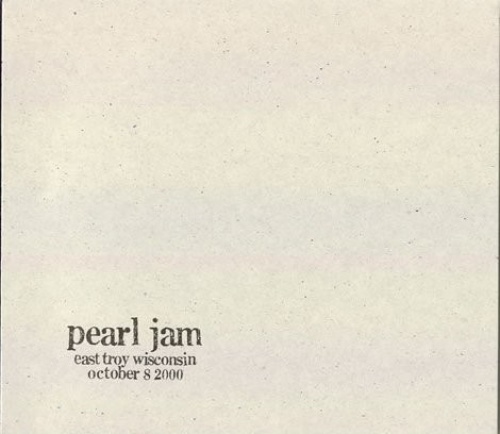 Pearl Jam's October 8, 2000, concert in East Troy, WI, was one of the most memorable shows of the year for one overriding reason -- the weather. The risky move of scheduling an outdoor show in Wisconsin in early October backfired. It was freezing. After two songs, Eddie Vedder greets 25,000-plus hardy souls by saying, "Welcome to the ice bowl. If anyone can handle it, it's you." By show's end, temperatures were in the mid-20s, and it must have felt much colder with the wind-chill factor. At one point, Vedder addresses people who will listen to the bootleg in the future. He says that the only way to really understand the conditions is if they go into a freezer in a restaurant. However, both the band and the fans hang in there, although the show is a little shorter since there was no second encore. The amazing thing about this concert is that it is so good. The band is in such a good groove at this point in the tour that even horrible weather doesn't affect them too much. Sure, there are some wrong chords and messed-up lyrics, but not too many. The energy and intensity is sky high. Ironically, the summery ballad "Oceans" from Ten was chosen beforehand to be the opening song this night, but it was changed at the last minute to the more appropriate "Of the Girl." The band rewards the fans by playing all the classics, along with a few twists, like the fitting "Faithfull" from Yield. "Porch" closes the main set, and Vedder includes verses of "It's OK" by little-known indie rock band Dead Moon in the long instrumental middle section of the song. The band had included bits of the song in previous versions of "Daughter" on the tour. Meanwhile, tonight's version of "Daughter" includes some of R.E.M.'s "The Wrong Child." There are no full cover versions performed by the band this night, which is unusual, but this show has everything else one could ask for under the circumstances. As the coldest gig the band ever played, it is an extremely memorable night -- perfect for listening to during that chilly winter night or unseasonably cold day. Let the band's energy warm you when you put this one on your stereo. You won't be disappointed.