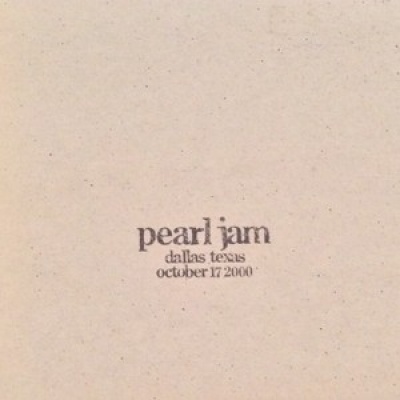 There's not much to say about Pearl Jam's October 17, 2000, concert in Dallas. It's a typical big-city set list, with all the songs you'd expect to hear the band play to a large crowd. The performance is just OK, not particularly inspired. As usual on nights like this, the most interesting moments are between songs. Since the concert is at the state fairgrounds, Eddie Vedder dedicates "Given to Fly" to the people on the Ferris wheel. The gun violence double shot -- "Rival" and "Jeremy" -- is played, with the local angle that "Jeremy" is dedicated to the friends and relatives of the real-life Jeremy, who lived in Richardson, TX. For you statistics buffs, this was the sixth time in the last eight shows that "Jeremy" was played, proving that the band knew it was October and the kids were back in school. (Compare that to the fact that the band played the song six times on the whole European tour back in the summer.) "Brain of J" is dusted off for Dallas, since the song was inspired by the theft of JFK's brain in the aftermath of the Kennedy assassination, which occurred in Dallas. During the encore, the band plays the rare B-side "U," which leads into the classic "Betterman." Vedder links them with the comment, "That song was about a selfish woman, and this one's about a selfish man." During the jam section of "Porch," Vedder learns that a certain New York Yankees baseball player with allegations of spousal abuse has hit a home run to defeat his beloved Seattle Mariners and send New York to the World Series again. This leads him to go on a rant about "F***ing wife beaters." He dedicates "Leaving Here," a song about "the empowerment of women," to the player in question without naming names. (Without getting libelous, baseball historians will know who it is.) The concert ends with a version of the Who's classic "Baba O'Riley," always a crowd-pleaser. This is an entertaining, sometimes humorous, but very average show, and a good choice for someone who wants a typical general audience Pearl Jam set. Otherwise, the Dallas show can be skipped over by the casual fan without much regret.