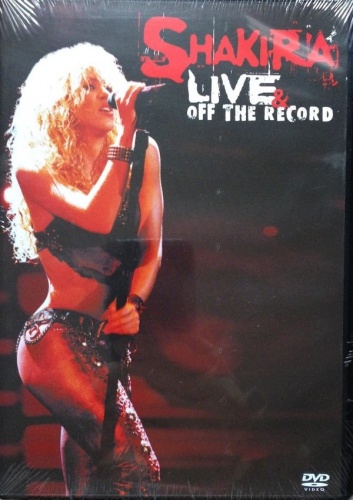 Buying time while she preps a follow-up to 2001's Laundry Service, Shakira released the CD/DVD combo Live & Off the Record in the spring of 2004. This is standard practice for her -- between each of her studio albums, she's released collections of remixes or live material. One of those, 2000's Unplugged, was excellent, capturing the diva on the rise and revealing another side of her musical personality. In contrast, Live & Off the Record doesn't offer any such revelations -- it captures the big-budget spectacular of her stadium shows. As such, the DVD is preferable to the CD, since it has it all: the light shows, a 90-minute program that's close to a full concert, and, of course, footage of Shakira herself, singing, playing guitar, and dancing, all of which is worthwhile for hardcore fans. On record, this same material, cut from 15 songs to ten, is enjoyable -- more so than other live albums from dance-pop divas, since Shakira sings live and the arrangements are longer and occasionally different than their studio versions -- but it's not as absorbing as the visual experience. Overall, it's not bad and it will surely be of interest to hardcore fans -- who themselves will be the only ones who have the patience to sit through the hourlong documentary on the DVD, filled with footage of Shakira touring the world and doing such fun things as blowing bubbles, getting massages, and being serenaded by a mariachi band -- but it's ultimately not much more than a stopgap release between original albums.