By the time that The Bogmen had signed to Arista Records, the band had already managed to secure a rabid live cult following for itself in the New York City bar and college scene. Playing legendary haunts like the Bitter End, the Limelight, and even headlining Irving Plaza without the benefit of a record deal, it appeared that the band was poised for bigger and better things. Signing to Clive Davis' label however proved to be the first step in the wrong direction. Led by talented front man Bill Campion, the band journeyed out West to beautiful Sausalito, CA, to record its debut with ex-Talking Heads man, Jerry Harrison. In a live setting, one of the band's charms had always been its ability to launch into spirited jams that encompassed a gamut flavors. Bongos would give way to hippie workouts and full on free-form jazz. Think, Rusted Root meets the Barenaked Ladies. Unfortunately, when the band tried to capture this on tape, it didn't work. Much to the contrary, songs like "Raga,," "It's a Fast Horizon," and "Piss Tongue" may have once sounded exciting in a club setting but in the studio they sound like a series of incomplete ideas. Bill Campion's stream-of-consciousness lyrics are even stranger. Lyrically, about half the songs on Life Begins at 40 Million make little to no sense. The band does a little better for itself on a track like "What's Behind your Coat," which sounds like it owes a lot to one Mr. David Byrne. With all its fine musicianship, Life Begins at 40 Million simply lacks direction and any semblance of cohesiveness. Interesting it may be, but better than average it isn't. 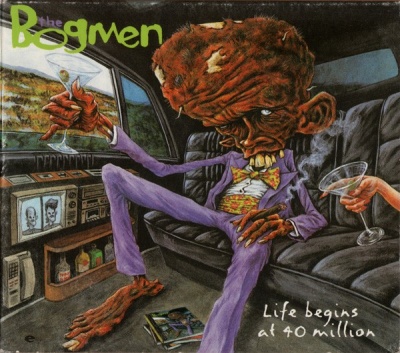