Let's Build a World Together Review

The chemistry that develops between partners in a male and female country music duo can sometimes be based on fantasy, as was obviously the case with Loretta Lynn and Ernest Tubb, who no country listener even imagined for a moment were romantically involved. Tammy Wynette and George Jones, on the other hand, did have a relationship. As the details of it became public knowledge, often resembling pages torn out of sleazy novels written by Jim Thompson, the inevitable result was that the music the two made started to sound somewhat dull and dreary in comparison. The reasons for this are musical, however, and were there in the tracks all along. For one thing, and it is a mighty big thing at that, the persona of Jones gets toned down for these tracks. Along with that also goes much of the rocking, honky tonk flavor that is part of the best music this artist makes. The closest Jones gets to the type of losers he normally brings to life is the joker in "My Elusive Dreams," who keeps flitting from one disaster to the next, good ol' "Stand by Your Man" Tammy at his side. This is the best track in the set, despite the fact this is an overplayed number from the '60s country songbook. "After the Fire Is Gone" is also a well-done tune, the bitterness and cynicism flavored country style, which means plenty of pedal steel. It is too bad there are not more country songs here of the quality of the Louvin Brothers' "When I Stop Dreaming," as much of this material seems like it was hammered out by country songwriting teams too enamored with these giant country stars to relax and come up with something that isn't just romantic tripe. And that isn't said lightly. Just as some country fans will decide to buy an album based on provocative or amusing song titles, a look at the titles here and one will want to put the record back on the shelf. The singers themselves don't do that much better when whipping out the songwriting notebooks, either. The blend of these two beautiful voices is of course a great moment in country history, but this is one of those albums where it is the songs, and not the singers, that have to provide something for the country fan to gnaw on other than distracted thoughts about what the world they built might have really been like. 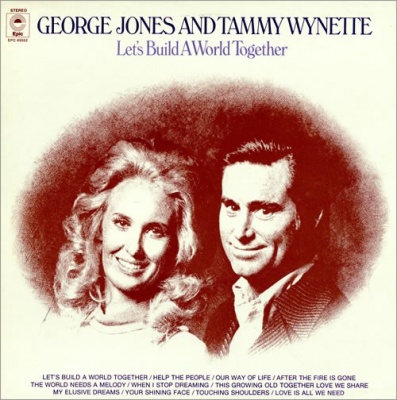