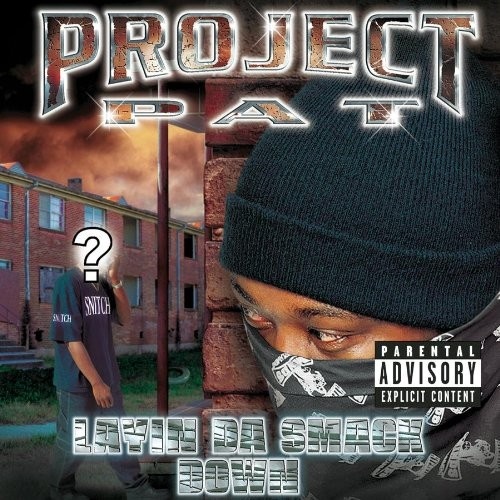 There's nothing like an arrest record to bolster a rapper's street credibility, and at the time of the long-delayed 2002 release of Project Pat's fourth album, Layin' da Smack Down, the Memphis gangsta was facing parole violation charges due to a weapons arrest. Although his imprisonment might have limited promotional opportunities for the album, the Three 6 Mafia affiliate's notoriety certainly didn't hurt Layin' da Smack Down as much as Project Pat's own limited abilities. The home of Elvis Presley and Graceland, Stax Records and Sun Studios, Memphis also has some of the meanest streets in the Southeast, easily the equal of L.A.'s Compton or Houston's infamous projects. It's from the dangerous Memphis that surrounds the shellshocked Hollywood Avenue neighborhood that produced Project Pat (aka Patrick Houston) and Three 6 Mafia, and it's from this crime-plagued area of the Bluff City that Project Pat draws his lyrical inspiration. Whereas Project Pat's previous albums, such as Mista Don't Play and Ghetty Green, offered their fair share of misogynist rhymes, Layin' da Smack Down revels in demeaning, pornographic sex. When not concentrating on his own carnal pleasures, Project Pat offers the usual lyrical litany of drugs, crime, and random violence that dominates hardcore rap, the rapper obviously running out of fresh perspectives on the subject matter. Although producers Juicy J (Pat's brother) and DJ Paul bring a bouncy and bright sound to Layin' da Smack Down, Pat's material lacks the mix of intelligence, humor, and menace that fuels the best Three 6 Mafia songs. Layin' da Smack Down shows Project Pat to be a less-charismatic, more thuggish alternative to other Dirty South artists such as Eightball or OutKast, one of the slighter talents in the Three 6 Mafia stable.