The Latin pop and rock en español fields are full of talented artists who would probably be huge in the English-language market if they didn't sing in Spanish exclusively. Some non-Spanish-speaking listeners don't mind listening to lyrics they don't understand -- the beat and the melody are enough for them -- but many others insist on understanding every word that is coming out of an artist's mouth. Thus, Latin stars usually don't cross over to English-speaking audiences until they start singing in English, which is what Shakira does on 2001's Laundry Service. "Whenever, Wherever," this album's infectious lead single, is to Shakira what "Livin' la Vida Loca" was to Ricky Martin: the major hit that brought her to English-speaking audiences in a big way. For Shakira, singing and writing in mostly English was no doubt a challenge -- Spanish, after all, is the Colombian star's primary language. But it's a challenge that she handles impressively well. Shakira, it turns out, sings quite convincingly in English -- and her creativity is at a high level on melodic, hooky pop/rock like "Rules" and "Ready for the Good Times." Like Shakira's Spanish-language albums, this self-produced CD is enjoyably eclectic; she successfully combines pop/rock with everything from tango on "Objection" and Andean music on "Whenever, Wherever" to Middle Eastern music on "Eyes Like Yours" (which contains lyrics by Gloria Estefan and is an English translation of Shakira's late-'90s smash, "Ojos Así"). While nine of Laundry Service's 13 tracks are in English, four are in Spanish (including Spanish translations of "Whenever, Wherever" and "Objection"). And by including these four tracks, Shakira seems to be assuring her Spanish-speaking fans that she hasn't abandoned them. Dónde Están los Ladrones? remains Shakira's most essential album, but Laundry Service is an excellent English-language debut for the South American vocalist. 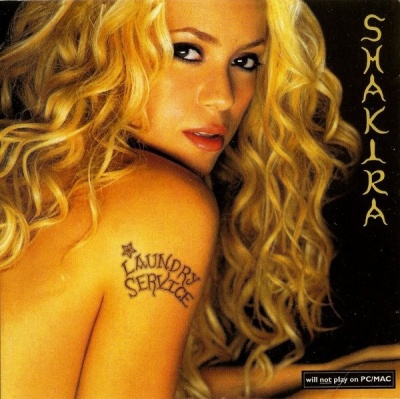