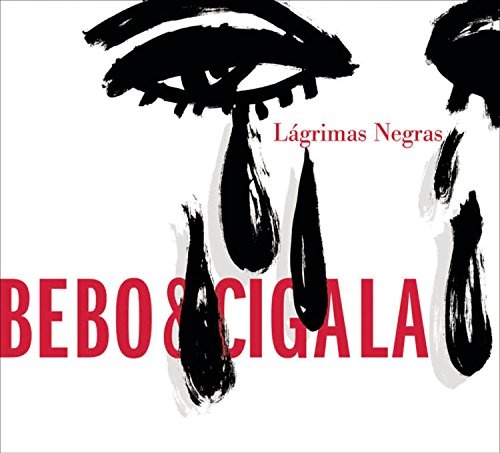 Lágrimas Negras (Black Tears) is a collaborative effort between the octogenarian Cuban piano master Bebo Valdés and the reigning Spanish flamenco cantador, Diego El Cigala. Recorded for Fernando Trueba and Nat Chediak's Calle 54 label, the sessions took place in Madrid between September and December 2002. Maestro Valdés (born in 1918), the father of the jazz pianist Chucho, has a long history as an innovator in Cuban music. He recorded the first Afro-Cuban jazz session in 1952, and was a tutor to the great bandleader Beny Moré, writing early charts for him. Valdés is also a world-class arranger. Diego El Cigala was born in 1960, and has become the undisputed king of Spain's flamenco singers. This recording features nine tracks that meld together cooking son, jazz, Afro-Caribbean, and flamenco rhythms, in tunes by composers such as Lolita de la Colina, Virgilio and Homero Expósito, Ramón Perelló, the grand team of Tom Jobim and Vinícius de Moraes, Caetano Veloso (who makes a guest appearance), Maria Teresa Vera, Miguel Matamoros (who composed the title track), and others. Most are Cuban ballads. Guests such as Veloso, Paquito D'Rivera, Pancho Terry, Tata Güines, and El Niño Josele fall by on different tracks. And while the tunes are top-shelf and the guests make this a very special and historic occasion, it is the unusual dynamic and the integrity with which it is employed that makes this set so unique. Valdés' style is an elegant one; his rhythmic left hand accents rhythms and shifts them effortlessly, adding street and nuance here, space and tension there. Always his notes are sure, precise, and solid. El Cigala's voice is a true cantador's; he wavers, lilts, growls, and gutturally moans; he slips between rhythms and melodies, underscoring first one and then another, using the rhythms to sing counterpoint to the piano's stridency and sheer graceful approach in the ballads, shouting assent and further challenges on the uptempo sons. Together, the combination is its own moving poetry, meeting in the middle of a tradition as old as flamenco's "cante jondo" and as integrated as Cuba's. The sacred and profane dine and drink together and no one will say which is which. All nine songs offer differing emphases on lyric and rhythm, all offer variant harmonic concerns, but they all contain the spirit of the "duende." While there isn't a mediocre second on this album and all of the performances are breathtaking, "Lágrimas Negras" and "Corazón Loco" are clear standouts. This is destined to be a classic, and hopefully a gateway to more experiments like this one.