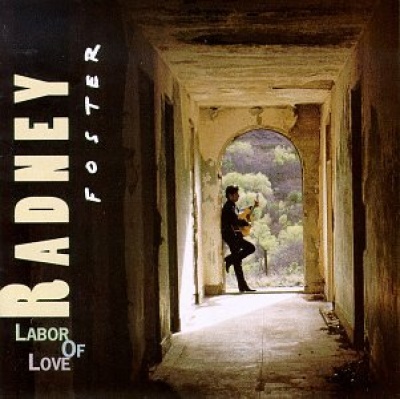 Bespectacled Radney Foster, once half of Foster & Lloyd, doesn't look like a typical country star. But wait'll you hear LABOR OF LOVE. As deeply traditional as the giants who have influenced him, the Texas singer-songwriter is pure country on his second solo album. "Everybody Gets The Blues" is a straightforward tribute to Waylon Jennings, while the shuffling swath of steel "Walkin' Talkin' Woman" is played under the influence of Buck Owens. But Foster is equally inspired by rock artists; his is a contemporary approach, with deep roots and universal themes.

A passionate spirit pervades honky-tonk tracks like "Willin' To Walk" and ballads like "Never Say Die," in which Foster expresses his most optimistic romanticism. Two other highlights include the pulsing "Broke Down" and the upbeat power ballad "If It Were Me," about a woman taken for granted. Compact and down-to-the-bone, Foster's songs paint distinct pictures, always with a precise point of view. LABOR OF LOVE is an excellent release by a compelling writer, expressive vocalist and first-rate band.