Elements of Miguel's second album started to reach the public around the time "Lotus Flower Bomb," the singer's collaboration with Wale, began to overstay its welcome on mainstream urban radio. From late February 2012 through that April, Miguel released a trio of free three-song EPs dubbed Art Dealer Chic. Altogether, the material was funkier and weirder than that of All I Want Is You. The high points eclipsed that album's singles, and some out-there moments confirmed that the freaky and daring qualities of "Teach Me" were not simply dabblings. Kaleidoscope Dream includes some of the ADC songs in varying form, as well as the six songs from the July and September album-preview EPs. The small quantity of new material makes Kaleidoscope Dream anticlimactic for some. For them, the trade-off is that they heard the majority of 2012's most pleasurable pop-R&B album digital Advent calendar style. It leads with "Adorn," the singer's second solo number one R&B/Hip-Hop single; there's some atmospheric, mechanical/organic likeness to Marvin Gaye's 1982 ballad "Sexual Healing," but it trades lust for soul-baring affection and carries some of the era's sweetest backgrounds and a knockout falsetto howl over probing but unobtrusive bass. That song and most of the others stay true to the album's title and maintain an illusory atmosphere. This sense is intensified by some unexpected touches, like an interlude where Miguel softly croons part of the Zombies' "Time of the Season" over synthesizer goo, and the hovering title track, which incorporates the bassline from Labi Siffre's "I Got The" (in a manner heavier than Eminem's "My Name Is") and some "Strawberry Letter 23"-like guitar swirls. There are instances where the lyrical content edges too close to "artsy" teenage erotic poetry, but no song is without an attractive quality, whether it's a heavenly melody, a riveting rhythm, or a boggling production nuance. The set is cunningly sequenced, too. The loose "Where's the Fun in Forever" -- atmospheric yet mostly drums and bass, with some cool and casual background vocals from Alicia Keys -- melts into ADC highlight "Arch & Point," which is something like a skeletal power pop number slowed to a seductively squalid prowl. In its new context, the back half of that combination sounds fresh. Miguel is listed first in the songwriting credits of each song, and he's involved with much of the production, but he gets valuable support from earlier associates Salaam Remi and Happy Perez, as well as the likes of Warren "Oak" Felder, Andrew "Pop" Wansel, Steve "Ace" Mostyn, and J*Davey's Brook D'Leau, whose baleful keyboards on the closing "Candles in the Rain" flirt with evil. 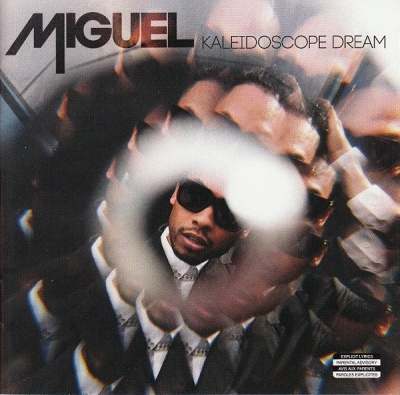