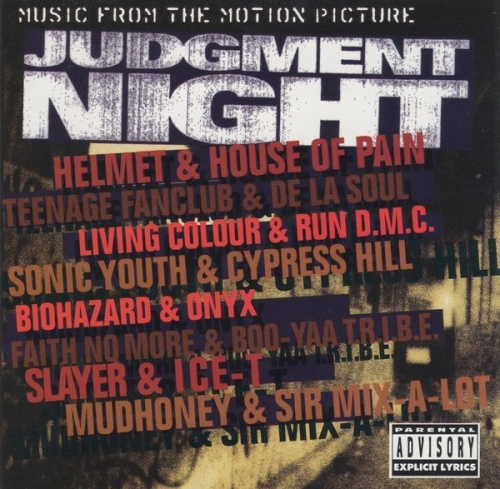 Music genres separated along racial divides, like rock and rap, have always borrowed from each other, even if it's bands on the edges of either camp. The soundtrack to the film Judgment Night takes the racial themes of the movie to the soundtrack, pulling together some of the best acts in both genres. Rather than cover existing songs, the bands collaborated on the frequently shared themes of injustice, violence, prowess at the mike, and love of the herb. Every track is exceedingly well constructed and produced, though it's debatable if new ground is being covered. By taking rap acts that already lean toward rock, like House of Pain and Ice-T, and rock acts that dabble in rap, like Faith No More, there aren't many surprises. Two tracks, "Fallin'" with Teenage Fan Club and De La Soul, and "I Love You Mary Jane" with Sonic Youth and Cypress Hill take a decidedly mellow approach. The other tracks feed off each other's rage and rhythm, particularly Slayer and Ice-T's "Disorder" and Helmet and House of Pain's "Just Another Victim." Surprisingly, the only track that really falls flat is the Pearl Jam and Cypress Hill collaboration "Real Thing."