This handsomely packaged reissue captures two major stars in the early stages of their careers: conductor James Levine leads the Chicago Symphony Orchestra in three popular Bach works, the Brandenburg Concertos No. 2 and No. 5 and the "Wedding" Cantata, No. 202. The cantata features Kathleen Battle as soloist. This 1977 recording has the big names, and to an extent they deliver the goods. Levine's handling of the orchestra is masterful. He achieves the kind of transparency of texture that authentic-instrument ensembles strive for, and that virtually nobody else has achieved with an old-line group like the Chicago Symphony Orchestra. If his outer movements in the Brandenburg Concerto No. 5 have a bit of the shapeless quality that inevitably used to call forth the sewing-machine metaphor in connection with Baroque music, he provides admirable breathing room for the work's striking harpsichord parts -- and then fills it with very strong playing of his own. It's a virtuoso performance all around.

But the rest of the CD is an incoherent mess. Battle's voice was in fine form here, but she gives the kind of performance that calls attention to itself too much. That's fatal with Bach, who more than almost any other composer demands a certain self-effacement on the part of performers. The disc is rounded out with a completely unrelated performance, from years later, by the Württembergisches Kammerorchester Heilbronn of the Suite No. 2 in B minor for orchestra, BWV 1067, under conductor Jörg Faerber. Made in 1991, it's not a terrible reading, but it doesn't connect with Levine's performances at any level. Surely there were other Bach performances by Levine, or by the Chicago Symphony, or even by Kathleen Battle that might have been considered. And why, unless it was simply to capitalize on the popularity of the Chicago Symphony's summer performance venue, is this disc designated as "Music from Ravinia"? None of the music came from Ravinia; the two Chicago Symphony selections were recorded at the Medinah Temple in downtown Chicago. As classical music struggles to get a foothold in a fragmented arts marketplace, what's needed are unified performances with a strong point of view that the performers care about putting across. Despite the strong points of this album, it doesn't hang together in the way that a self-proclaimed "essential" recording should. 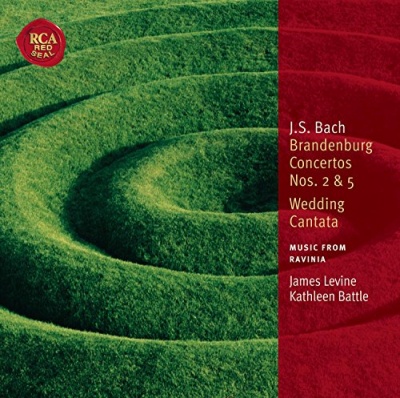