It's All Relative Review

Best known as an engaging and often humorous performer, and secondarily as Nashville songbird Pam Tillis' father, Mel Tillis deserves greater recognition as one of country music's more enduring and consistent songwriters. This oversight is addressed in It's All Relative, as Pam joins with a cast of Music City luminaries to interpret some of his better-known works. Her performance is right on the money from start to finish. On up-tempo tracks, whether honky tonk excursions like "Unmitigated Gall" or a brisk rockabilly sprint with Ray Benson through "Honey (Open That Door)," she's expressive, though somewhat restrained. It's at slower tempos that her abilities are most evident, as she exploits the interpretive room that ballads allow. An exceptional harmony singer, she knows how to play off of the unique timbre and phrasing contributed by Dolly Parton on a lacelike rendition of "Violet and a Rose" and Emmylou Harris in a more Daniel Lanois-influenced treatment of "Heart Over Mind." On her own, Tillis is even stronger; she turns "Detroit City" into an intimate journal, with misty memories of home and the weary grind of life in the city made equally vivid by her reading. Yet on "Emotions," backed by jazz pianist Beegie Adair, Tillis eases smoothly into a torchier style that has nothing to do with rural idylls. The last track, "Come On and Sing," brings Dad into the picture, along with a gaggle of his grandkids; it's a predictable cameo, but irresistible nonetheless and a perfect dessert for this rich repast. 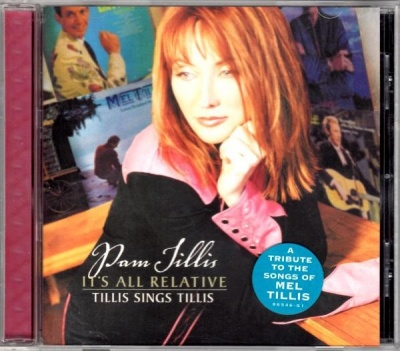 It's All Relative Album Information