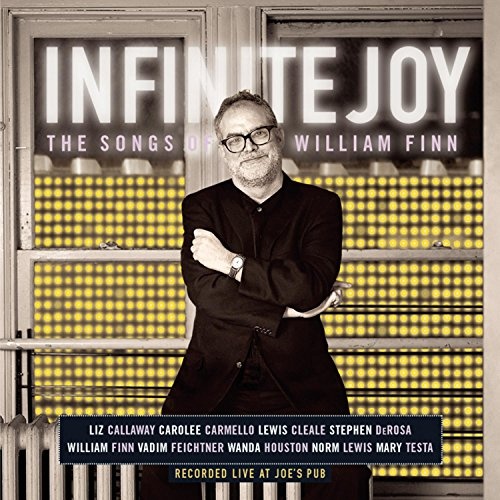 William Finn's wildly imaginative and uninhibited songs have earned him a reputation in the musical theater as an heir to Stephen Sondheim, but his uncompromising approach has led to infrequent productions and only one Broadway triumph, the Tony-winning Falsettos. Eight-and-a-half years on from that production, with only one other staging (1998's off-Broadway A New Brain) to his credit, Finn put together a revue of his songs for performance at Joe's Pub, a nightclub within New York's Public Theater. The dominant figure is the songwriter himself, who has a growling voice somewhat reminiscent of Dave Van Ronk's, although he makes Van Ronk sound smooth; in short, he can't sing. This doesn't keep his numbers, the introductory "Mister, Make Me a Song," the caustic "Republicans," and the hilarious "Stupid Things I Won't Do," from working, and he makes an enthusiastic master of ceremonies. But the real joys of the set come from the professional singers such as Liz Callaway, who caress ballads like "Sailing." In truth, there are more ballads here than one expects from a Finn show, though they are broken up by the songwriter's own contributions and by the rapid-fire "How Marvin Eats His Breakfast," from Finn's first work, In Trousers, and "The Baseball Game" from the sequel to its sequel, Falsettoland. Both are handled by Stephen DeRosa, who not only takes on all the characters in "The Baseball Game," but also performs them as if they were being voiced by members of an amateur production he claims to have seen at a community center. The performances, the show, and Finn's songs often have an "inside baseball" quality to them, revolving around the gay, Jewish world of musical theater. But they are often so witty, moving, and accomplished that they become universal despite themselves.