In the Silence Review

There has rarely been a shortage of musical talent emerging from Iceland, an island that is cast away in the northern echelons of the Atlantic Ocean, but which is rich in cultural and artistic talents, with the likes of Björk and Sigur Rós dominating their respective genres across the world. Icelandic tastemakers have also hoisted Ásgeir Trausti's debut album to the number one spot in the charts, a record which additionally scooped top accolades in the 2012 Icelandic Music Awards. Originally released as Dýrð í Dauðaþögn in his homeland, Ásgeir enlisted the help of John Grant to translate the record into English for this international release, and renamed it In the Silence. The melodic indie folk that Ásgeir incorporates here is poised intriguingly between acoustic instruments and electronic elements, and single the "King and Cross" expertly brings the two together in a charming slice of indie pop. The decision to translate the lyrics was wise and subsequently offers a more wide-spread accessibility to his songs that might not have been possible in his native tongue. Ásgeir and Grant have woven together whimsical tales and stories from the original Icelandic text without many obvious adjustments from the original melodies. Although upbeat for the most part -- "Torrent" and "In Harmony" are particular highlights -- there is a constant hint of melancholy that resides in the beauty of Ásgeir's high-pitched and unnervingly emotive vocals, which is brought out in the more brooding moments of the record. The downbeat and bass-driven "Going Home" uncovers an expansive and pensive side of Ásgeir, which is a welcome contrast to the initial sweetness, and at times tweeness, of his melodies and harmonies. Although it's unlikely In the Silence will have quite the same impact on the charts beyond the shores of Iceland, it does suggest another musical gem has been unearthed from the island's formidable pool of talent. 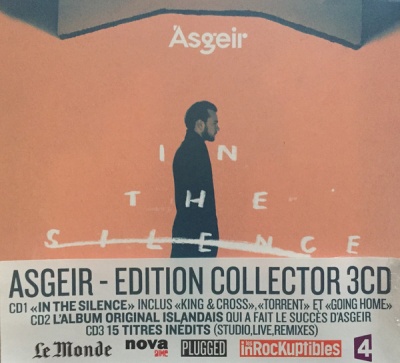 In the Silence Album Information