IGOR starts with a crackling, hyped-up overture that paints a scene of Tyler, The Creator at the wheel, reacting beside his singing passengers to the positive results they're receiving from the all-important car test: "Ridin' round town/They gon' feel this one." Tyler and a motorcade's worth of supporting vocalists fulfill the promise and threat with what plays out, a creatively vital and emotionally heartsick set with as much pain, vulnerability, and compulsion as a classic soul LP. Having found his seam with the Grammy-nominated Flower Boy, Tyler continues to make headway by constructing nearly the entirety of his self-produced follow-up out of songs that ache and swirl like "See You Again" and "911/Mr. Lonely." He's on a ruthless rampage in the frantic "What's Good," throwing lyrical elbows at anyone who crosses him, but otherwise, the album's fervid energy concerns a triangular relationship that goes from white hot to ice cold, sometimes within a couple verses. The wild swings are typified by "A Boy Is a Gun." Over a smudged early-'70s soul sample, Tyler likens his partner to high-risk protection, also "sweet as sugar, diabetic to the first degree," but after being made to feel like a third wheel, repeatedly insists, "Stay the fuck away from me." For each stirring moment, like when all he wants to do is make amends and "chase the sun" on a bike ride through a park, there's one with a uniquely Tyler mix of alarming possessiveness and humor. Take "New Magic Wand," where he sounds hollowed out by not having his lover completely to himself, then pitches up the vocals to accentuate a lunatic fantasy: "Your other one evaporate, we celebrate." Rather than finishing neatly with the cathartic (if purposefully sickly sounding) "I Don't Love You Anymore," IGOR concludes messily with Tyler asking for a platonic resolution that sounds more like co-dependent exasperation. Speaking of reliance, Tyler delegates (and deforms) more of the vocal load here than he did on Flower Boy. Solange and Jessy Wilson, plus Lil Uzi Vert and Kanye West, among others, often sound like their butterflies are as acute as Tyler's own. The productions are as nuanced and judiciously tricked out as they are on the previous album, adjusted to enhance all the agitation and grief, yet it's all ear candy -- spiraling synthesizers, vaguely psychedelic flourishes, and bumping drums galore. Roll down the windows, crank it, and keep the tissue on the armrest. 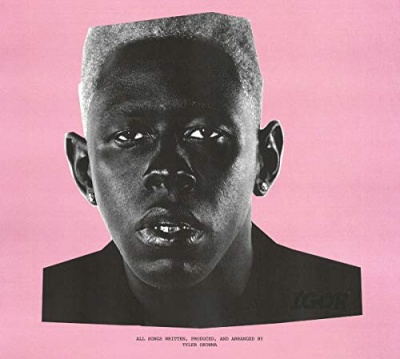