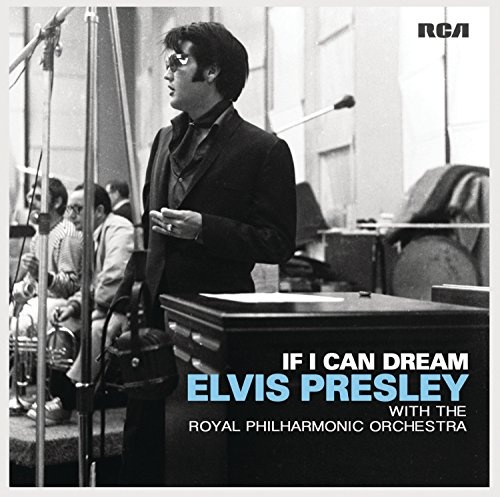 Elvis Presley always had a keen taste for schlock so perhaps he would've wanted to record an entire album with the Royal Philharmonic Orchestra -- and it's also possible that he'd want to duet with Michael Bublé, but duets aren't common within his catalog -- but If I Can Dream, a record assembled from original Elvis vocal tracks and newly recorded orchestral accompaniment, is most assuredly not an album Presley would've made if he was alive. To begin with, a constant in Presley's career was how he played with his bands -- drawing energy from their distinctive chemistry; whether it was Scotty Moore and Bill Black crammed into the confines of Sun Studio or James Burton leading the TCB Band on a wide stage -- he never treated the bands as support, he collaborated with them. Because he's a long-time gone, he's unable to play with the Royal Philharmonic Orchestra, so If I Can Dream contains no kinetic kick, no matter how well constructed it is. And make no mistake, it's a nicely produced record: it's impossible to find the seams between the present and the past and, if the light hits just right, If I Can Dream gives the illusion of a performance…not a live concert so much as a laser show spectacle culminating with a hologram of our departed beloved. Aside from the technical feat, there are some questionable areas of taste -- "Burning Love" can withstand a lot, but it's not meant to be a pumping Sunday afternoon at the Pops -- but such quibbles aren't even worth airing because the fact is, this entire project will either strike you as a delight or an exercise in bad judgment. It's too tasteful to be tacky, too refined to be memorable and ultimately, it isn't anything but a bore.