I Wanna Play for You Review

Stanley Clarke stretches his muscles and comes up with a mostly impressive, polystylistic, star-studded double album (now on one CD) that gravitates ever closer to the R&B mainstream. Clarke's writing remains strong and his tastes remain unpredictable, veering into rock, electronic music, acoustic jazz, even reggae in tandem with British rocker Jeff Beck. Clarke's excursion into disco, "Just a Feeling," is surprisingly and infectiously successful, thanks to a good bridge and George Duke's galvanizingly funky work on the Yamaha electric grand piano (his finest moment with Clarke by far). The brief "Blues for Mingus," a wry salute from one master bassist to another (Mingus died about six months before this album's release), is a cool acoustic breather for piano trio, and the eloquent Stan Getz can be detected, though nearly buried under the garish vocals and rock-style mix, on "The Streets of Philadelphia." Yet even the talented Clarke in full creative flower couldn't quite fill a double set with new material, so he has a tendency to reprise some of his old memorable riffs a lot, and there are several energetic snapshots of his live band in action. In its zeal to get this two-LP set onto one disc, Epic deleted three of the original 15 tracks -- including at least one gem, the sizzling hard rocker "All About" -- and scrambled the order of the remaining tunes. Which is dumb, because the missing tracks only take up a bit less than 12 minutes of playing time, not enough to overload a 65-minute disc. Hunt for the double-LP version if you can still play vinyl. 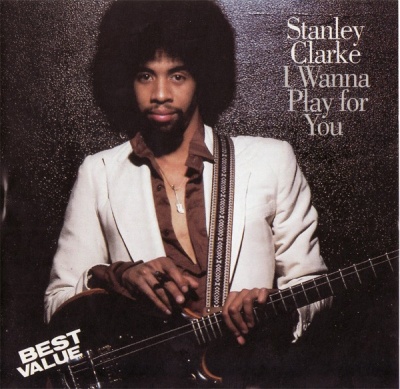 I Wanna Play for You Album Information