House of Flowers, based on a celebrated Truman Capote novella about love in a brothel in the West Indies, failed as a Broadway musical, running only 165 performances from its opening on December 30, 1954. But the cast album, featuring Pearl Bailey, Diahann Carroll, and Juanita Hall, turned the show into a Broadway legend because it preserved one of Harold Arlen's best scores. Legendary backstage arguments among the principals may have resulted in a production that didn't work in the theater, but you wouldn't have known that from the music, which included the lovely "A Sleepin' Bee," "Two Ladies in de Shade of de Banana Tree" (performed by Ada Moore and Enid Mosier), and "I Never Has Seen Snow." The irrepressible Bailey is really just her usual extroverted self, breaking out of character in "One Man (Ain't Quite Enough)" to announce that there hasn't been time to write the "ad libs" she was supposed to be singing at one point in the song. The young Carroll, in contrast, is delicate and sensitive as the ingénue. Capote's lyrics are serviceable, but Arlen's music, typically bluesy, takes on Caribbean elements and works as a whole piece as much as it does in its individual songs. As a result, House of Flowers did not become one of those forgotten Broadway flops; it was remembered as one of Broadway's legendary failures in which great talents did not mange to create a masterpiece that could have been. The cast album was the record of that elusive masterpiece and remains a classic. The 2003 CD reissue uses expanded versions of the tracks "Mardi Gras Waltz" and "Slide, Boy, Slide," and adds four bonus tracks. Percy Faith's rendition of "Mardi Gras Waltz" and Mosier's solo recording of "Two Ladies in de Shade of de Banana Tree" were released on albums around the same time as the cast album. Capote reads the portion of his novella that inspired "A Sleepin' Bee." And in a fascinating taped "memo," Arlen sets down his early musical ideas for that song. 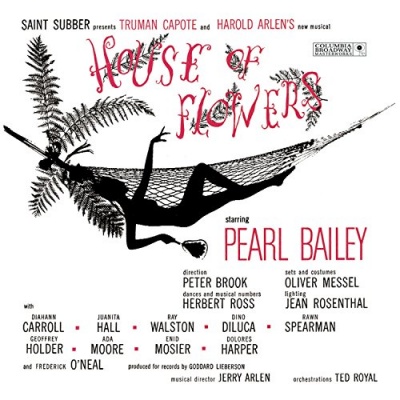