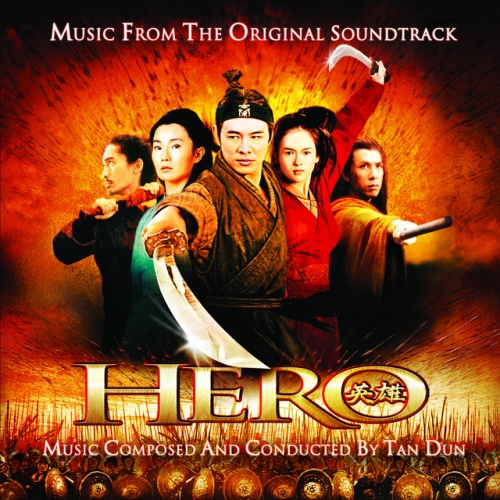 For Yimou Zhang' s epic Asian adventure Hero, award-winning composer Tan Dun elegantly blends the traditions of his Chinese homeland with the cinematic flair of the American Western. For his score for the award-winning soundtrack to Ang Lee's crossover hit Crouching Tiger, Hidden Dragon, Dun built the work around the talents of cellist Yo-Yo Ma, resulting in a rich and meditative fusion of classical and Asian folk. On Hero, Dun finds his muse in Israeli violin legend Itzhak Perlman, a versatile artist in his own right who played the role of John Williams' muse on the Academy Award-winning soundtrack to Schindler's List. Perlman's themes are strikingly similar to those in CTHD, which would be disappointing if it weren't for the thunderous male voice choir and the primal war cries of the Kodo Drummers that surround them. This is Dun at his most Morricone, and it lends an air of excitement and grandiosity that was lacking from the latter film. Like the film, Hero's score resembles an old-fashioned Hollywood epic, and its players respond to Dun's simplistic melodies with ferocity, tenderness, and stamina, but it has enough of an original voice to rise above the more predictable constrictions of its genre.