Even during its '70s heyday, soft rock never gained much respect, and of those soft rockers, perhaps no other act received as much disdain as America, a group inspired equally by the folk-rock of Crosby, Stills, Nash & Young and the pop of the Beatles. Aside from epitomizing the qualities that made soft rock anathema for hipsters and rock critics -- America, like the style itself, was too smooth, melodic, and square to be considered cool -- it's quite likely that the band received the brunt of the criticism because they wore their influences too plainly: their 1972 number one hit "A Horse with No Name" sounded uncannily like Neil Young, and they were produced by the fifth Beatle, George Martin, two moves that made it appear to some that America was acting as heirs to a throne that they did not deserve. They were also seen, along with fellow California soft rockers the Eagles, as diluting and perverting the ideals of folk-rock, turning it into bland pap for the masses, and they were scorned by the taste-makers for it: the second edition of the Rolling Stone Record Guide rated all their studio albums between zero and one stars, while Robert Christgau rated their 1975 compilation History: America's Greatest Hits a C-. America may not have been acclaimed, but they were popular, with "Ventura Highway," "A Horse with No Name," "Tin Man," "Lonely People," and "Sister Golden Hair" all reaching the Billboard Top Ten in the first half of the '70s, all on the strength of their impeccable melodic craft and easy, sunny vibes -- qualities that turned out to be enduring, too, as these songs remained staples on oldies and soft pop stations well into the new millennium, earning new fans along the way, fans who weren't preoccupied with America's image and enjoyed the music on its own mellow terms. Among these fans were Gen-Xers like Adam Schlesinger of Fountains of Wayne and former Smashing Pumpkin James Iha, whose 1998 solo debut, Let It Come Down, was bathed in a hazy, sunny glow that was unmistakably reminiscent of America. Generation X was notorious for ironically embracing and reviving '70s icons, but there was no trace of irony behind Schlesinger and Iha's love of America, as their production of Here & Now, America's 16th studio album and first unabashed attempt at a comeback, proves.

Schlesinger and Iha achieve something remarkable with Here & Now: they leave no fingerprints behind. The duo helms a production that is on paper a textbook indie rock hipster comeback record -- complete with cameos by Ryan Adams and Ben Kweller and covers of My Morning Jacket and Nada Surf -- but the finished album never sounds self-conscious or cloying, it sounds true to the sound and spirit of America. From the warm, welcoming production to the sweet harmonies, mellow vibes, and smooth melodies, Here & Now could easily be mistaken for an America album from the mid-'70s. There has been no attempt to modernize the group; Schlesinger and Iha have merely brought Gerry Beckley and Dewey Bunnell back to their strengths. Gone are the heavy layers of synthesizers that plagued America since the early '80s; gone are the earnest but meandering adult pop that made such '90s albums as Hourglass and Human Nature underwhelming. In their place are layers of melody and harmony presented simply and cleanly through songs that so easy to enjoy that it's easy to overlook how well constructed they are. This understated craft also means that Here & Now does not produce any revelations about the band or how they influenced the modern musicians who wisely blend into the background here, but the quiet nature of this album fits comfortably with the best of the band's work. Indeed, like the hits that are still heard on oldies radio -- and are also revived here in a live bonus disc, where Beckley and Bunnell perform every song on History -- the songs on Here & Now are appealing upon first listen but reveal their true strength upon repeated spins, as the melodies begin to catch hold in the subconscious and the warmth of the music feels friendly and familiar. On these repeated listens, Here & Now gains stature and it not only feels like a successful comeback, but the record that America fans of all ages have been waiting decades to hear. 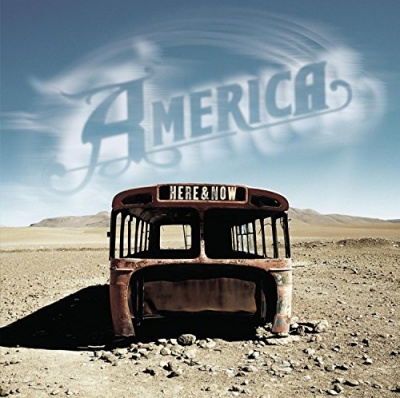