Ohio's Walk the Moon specialize in crafting big, escapist pop songs that smartly balance sugary hooks with earnest passion. It's a combination that's hard to resist and one which they push to ever more euphoric levels on their fifth album, 2021's aptly titled Heights. The album was released six years after the band broke through with their 2014 hit "Shut Up and Dance" (off Talking Is Hard) and also marks their tenth year as a band following 2017's What If Nothing. The album is the group's first since parting ways with longtime bassist Kevin Ray in 2020. Rather than replacing Ray, both lead singer Nichols Petricca and instrumentalist Eli Maiman shared bass duties throughout. Given Ray's departure and the fact that Walk the Moon largely recorded the album while in lockdown during the COVID-19 pandemic -- a period of increasing global social and political turmoil -- one might expect it to feel emotionally heavy or downtrodden. While there are certainly deep emotions at play on Heights, Walk the Moon summon a brightly optimistic mood, one that feels as connected to the synthy, uplifting '80s dance rock that drove their previous albums. It's also a sound which continues to set them alongside classic groups like Genesis, Hall & Oates, and Tears for Fears as much as contemporary acts like the 1975 and Neon Trees. Cuts like "Giants," "I'm Good," and the title-track "Heights" are massively hooky and effusive anthems. They often leave you with the sense that Walk the Moon are sending out positive vibes, encouraging their listeners not to lose sight of all the good in the world and themselves. On "Giants," Petricca sings "Hold your breath/Another deep dive/All the way down/Keep your head/This is the part of the movie/Where we turn it all around." It's this kind of cinematic, big-picture energy that Walk the Moon excel at and which drives all of Heights. 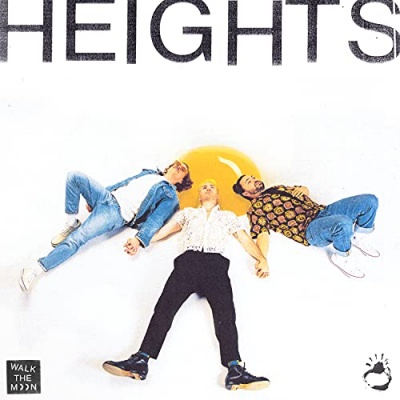