This is a rather pointless collection of tunes written (mostly) by Jim Steinman performed alternately by Meat Loaf and Bonnie Tyler. This sampler is one of those CDs that seemed like a good idea at the time (1993). Tyler had scored her big hits by that time, and Meat Loaf hadn't quite lit up the boards with Bat out of Hell II in the year this was issued. Steinman is the thread that holds this set together, full of bombast, excess, and rock & roll theater. Tyler's "It's a Heartache" is not here, but "Total Eclipse of the Heart," "Holdin' out for a Hero," "Faster Than the Speed of Night," "If You Were a Woman and I Was a Man," and "Straight for the Heart," as well as a hit cover of John Fogerty's "Have You Ever Seen the Rain." Meat Loaf's "Bat out Of Hell," "Two out of Three Ain't Bad," "You Took the Words Right out of My Mouth," "Heaven Can Wait," and "Dead Ringer for Love," "If You Really Want To" and "Read 'Em & Weep." The strange uniformity of the production and dated '80s drum and bass sounds, huge choruses, as well as Steinman's trademark Liberace-cum-Jerry Lee Lewis piano arrangements drench everything here. There is great gauche charm in this kind of Phil Spector-ish excess, and to give Steinman his full due, his songs, as gaudy and wordy as they are, are still brilliantly composed -- and in Meat Loaf's case at least, wonderfully sung as well. 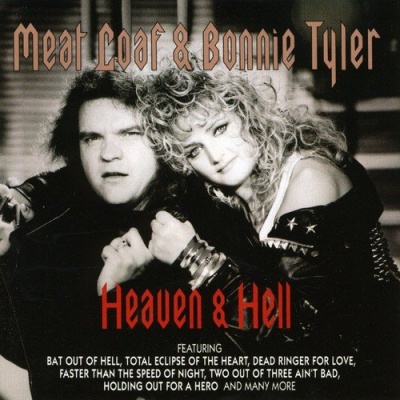