Growing Up Is Getting Old Review

The pensive, sepia-toned snapshot on the cover of Jason Michael Carroll's second album, Growing Up Is Getting Old, shows that the country singer is determined to leave the pretty-boy down-home hunk of his first album behind -- at least in terms of image, if not quite in terms of music. It may be a little softer, a little broader, a little bit self-consciously older, but Growing Up Is Getting Old shows the same fondness for arena country clichés as Carroll's 2007 debut, Waitin' in the Country, relying heavily on sports-bar rockers and radio-ready ballads, all peppered with signifiers of Middle American life. The whole thing opens with a Saturday night bar brawl, trucks appear in every other song, whiskey flows like water, and there are dewy-eyed salutes to "Where I'm From," trips through the past fueled by flipping through a yearbook, and product placement and name drops by the dozen -- all capped off by simple truths like "I think honesty is right/I think lying is wrong." That quote comes from "That's All I Know," one of three songs that Carroll co-wrote here, and if its strained everyman platitude suggests that he might need assistance writing, many of his made-to-order songs here pander just as heavily, sometimes dipping into the maudlin, as when the divorced dad calls home on "Tears" or when "Where I'm From" ends with a chorus of "Amazing Grace." Like before, Carroll can almost turn these coldly calculated clichés into something resembling genuine emotion -- his voice is warm and friendly, giving his readings a conversational lilt -- but even his easy touch can't disguise how Growing Up Is Getting Old is crassly constructed to hit every mark in modern country in 2009. 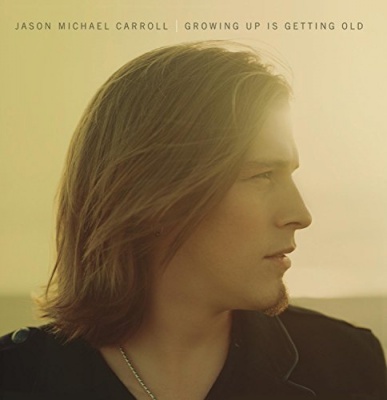 Growing Up Is Getting Old Album Information