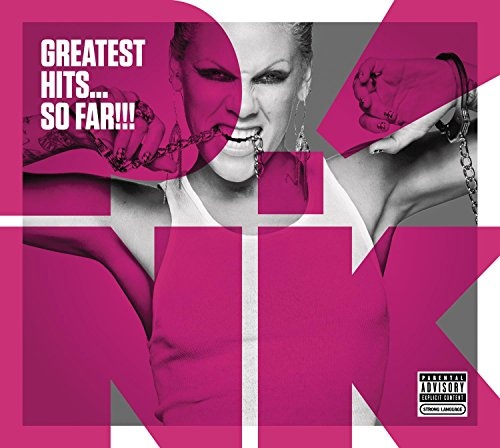 Initially positioned as a white-girl R&B singer in the vein of TLC, P!nk quickly turned into something more distinctive, embracing rock & roll and confessionals in equal measure on her second album, 2001's M!ssundaztood. "Get the Party Started" provided her breakthrough, its hedonism balanced by its raw-nerve sequel "Don't Let Me Get Me," and from there she racked up a decade's worth of hits, bouncing between these two extremes. Released in 2010, Greatest Hits... So Far!!! rounds up the great majority of these hits, bypassing some singles -- her debut "Most Girls" and "You Make Me Sick," "God Is a DJ," "Funhouse," and, most regrettably, "Feel Good Time," her Beck/William Orbit-written entry for the Charlie's Angels II: Full Throttle soundtrack -- but hitting all the blockbusters ("There You Go," "Just Like a Pill," "Trouble," "Stupid Girls," "U + Ur Hand," "So What," "Please Don't Leave Me") while adding two new entries to her canon: the rabble-rousing "Raise Your Glass" and the profane love letter "F**kin' Perfect." Both new entries are fine, even if they border ever so slightly on the conventional, but the real story of Greatest Hits... So Far!!! is naturally the well-known hits that remain smart, addictive pop even after innumerable plays.