Survivor's Greatest Hits, a bare-bones, ten-song collection, was released in 1989 and quickly disappeared -- vanished, out of print. It was later replaced by an identically titled 12-song collection in 1993 that is far superior because it includes "American Heartbeat" -- the other hit from 1982's Eye of the Tiger album -- as well as lyrics and basic liner notes. Neither compilation includes any photos, which reinforces the cruel critical notion that this Chicago pop/rock quintet was yet another faceless AOR act. Other U.S.-based bands lumped in this "corporate rock" category included Foreigner, Journey, REO Speedwagon, and Styx. Survivor was perhaps the most painful example of this tag because vocalist Dave Bickler, who left after 1983's Caught in the Game, was replaced by Jimi Jamison and nobody really noticed the difference. Their voices are virtually indistinguishable from each other. Bickler sang lead on "Eye of the Tiger," an all-time classic single, but Jamison tallied more big hits. Seven songs overlap on both collections, and they are the obvious choices: "Eye of the Tiger," "High on You," "I Can't Hold Back," "Is This Love," "Poor Man's Son," "Burning Heart," and "The Search Is Over." The 1989 set also includes "Desperate Dreams" and "How Much Love," which are both pleasant, if slight, uptempo tunes, and the piano-based ballad "Man Against the World." 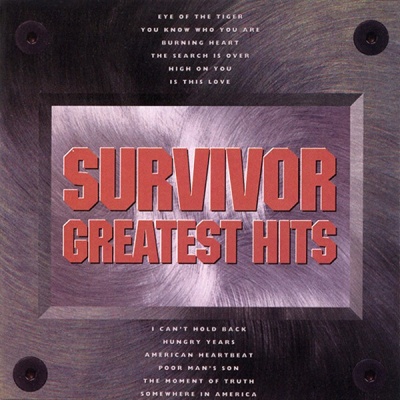