This disc of Alicia de Larrocha of relatively little-known Granados suites has apparently been on the shelf for quite some time. Although recorded in 1994 at about the same time as her other RCA/Red Seal two recordings of Granados (and bearing a catalog number from that same era), there doesn't seem to be any prior incarnation of issue for these works. The good news is if that is so, this has been well worth the wait. Escenas románticas, Bocetos, and Cuentos de la juventud are all Granados works that have seldom been recorded in their entirety, the last set being intended as "easy pieces" for students and even booklet note writer Harris Goldsmith refers to the whole as "salon pieces." Whether or not this is a fair categorization of the music, de Larrocha plays these works as though they are the most important in the world, with a deft touch and a clear communication of Granados' themes and signature harmonies. This disc is an unexpected delight and well worth your attention. 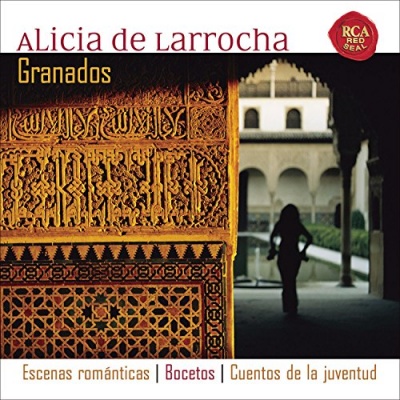